Are you puzzled by references in your newspaper or on TV bulletins to 'brigades' or 'divisions' moving into position on disputed borders? Perhaps talk of 'wings' of aircraft being moved to the latest international hotspot leaves you uncertain of what on earth they're talking about. Or maybe you're having trouble working out just how a 'squadron' can simultaneously refer to a number of aircraft, ships and tanks?

If so, this is the guide you need: a run down of military formations: what they are and the numbers and ranks involved.

Each of the services is very different so we've separated this guide into three sections:

Army formations are the building blocks by which fighting forces are created and organised for any purpose, from patrolling a street or guarding a checkpoint to invading a country.

There are a couple of overall points to bear in mind from the beginning.

First, army formations are becoming smaller in the 21st century than they were in the 20th. This is basically because the relationship between personnel and equipment is changing. Modern military units place much greater reliance on vehicles and other equipment than their equivalents did in World War 1 or World War 2, and that kit has become much more sophisticated, capable and expensive. 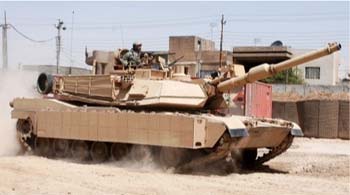 To take one example, the modern US Army battle tank, the M1A1 Abrams has a greater fighting power than a whole regiment of M4 Shermans, the USA's mainstay medium tank of WW2. True, it also costs around $9m per copy, compared to around $832,000 apiece for the M4 at today's prices.

So one Abrams costs as much as 11 Shermans. However, it would be able to destroy the lot in little over five minutes since the poor Shermans would have to close to point blank range to be able to even dent the Abrams armour, while the modern tank could unerringly pick them off at up to three miles away.

The second point is that different nations armies use different hierarchical conventions or use equivalent names to mean very different things. The term 'regiment', for example, is particularly perplexing, as we shall see.

The third point is that some terms, like 'squadron' are shared across all three fighting services. Just what these mean in an army, naval or air force context will also become clear as you read on.

It's easiest if we deal with these in ascending order of size, working from the bottom up. The symbols that appear in brackets are the NATO APP codes for each formation that denote their scale on counters, flags or maps.

For most armies, this is the basic infantry fighting unit, a formation of eight to 14 soldiers led by a corporal or sergeant and comprising two 'fire teams' each built around one support weapon or light machine gun. In some armies, the fire teams are called squads, making up a section.

In the British Army, the section is the basic fighting unit, equivalent to the squad described above, comprising at least eight soldiers in two teams, typically led by a corporal and lance-corporal. In other armies, the section or 'patrol' is made up of two or more squads. 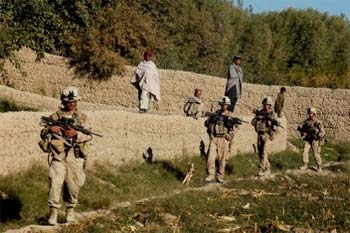 US Marine fire team in Afghanistan: support weapon at rear

This is the basic unit that manoeuvres around a battlefield, a formation of two to five sections, numbering 26–65 soldiers led by a warrant officer; usually first or second lieutenant.

The British/Commonwealth armoured equivalent of a platoon is a 'troop' of three or four fighting vehicles.

The company comprises between two and eight platoons (80-225 soldiers), led by a captain or major. The equivalent armoured formation is a 'squadron' of up to ten fighting vehicles or an artillery 'battery', usually four guns or rocket launchers.

In most armies, the battalion is the basic logistics and organisational unit, the smallest one that is regarded as a complete organisation that is capable of operating on its own, with a complete artillery, transport, supply, catering and medical infrastructure. A battalion usually comprises five or six companies, with giving a total strength of around 800-1,000 soldiers, led by a lieutenant-colonel or colonel.

British Army infantry strength is measured in battalions. At last count there were 49 infantry battalions, 36 front line and 13 reserve.

The equivalent armoured formations are a British or Commonwealth armoured or cavalry regiment or a US Army armoured cavalry squadron.

Basically, a regiment comprises two or more battalions, with a strength of up to 3,000 soldiers and led by a full colonel.

However, this is undoubtedly the most difficult formation to define, being both bigger and smaller than a battalion. How can that be? 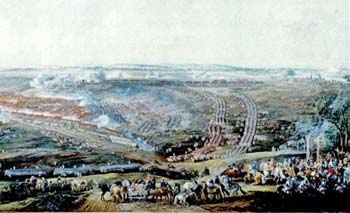 Regiments on the field: Fontenoy 1745

It depends on how traditional the army is, and how much it wants to retain links with its heritage. From the start of the 17th century and the beginning of full time armies, regiments were the basic units that recruited soldiers and had their own distinctive uniforms. Over time, some regiments, like the Household Cavalry Mounted Regiment, became ever smaller so that they ended up as part of battalion-sized formations.

The British Army retains the regiment as the basic organisational formation, the one that recruits and to which soldiers feel they 'belong'. British army regiments can contain between two and seven battalions, though each of the Guards regiments are actually single battalions.

It gets more confusing still when we look at other armies. The US Army started as a collection of regiments but switched to divisions as the basic recruiting unit from the US Civil War onwards. In the US Army, three or four infantry regiments make up a division, each comprising two or three battalions, whereas cavalry regiments (armoured or helicopter) are battalion-sized.

In Russian, Chinese and other armies based on Soviet doctrine, the regiment is something else again - a brigade-sized infantry or armoured formation comprising three battalions. Even more confusingly, a Soviet-influenced 'regiment' can also refer to an artillery formation organised in divisions or an aviation formation comprising two or more squadrons.

From here on up, it becomes more straightforward. A brigade comprises two or more regiments, or at least three battalions and is 3,000-5,000 strong, under the command of a brigadier or lieutenant general (British Army) or one-star general (US Army). In Soviet style armies, brigades were once almost unknown but are now starting to take the place of divisions.

A division comprises 2-4 brigades (or regiments in Soviet-style armies) and can be anywhere between 10,000 and 30,000 strong. A division is commanded by a major-general or full general in European armies and by a two-star general in the US Army. In 20th century warfare, the division was the basic operational manoeuvre unit with at least one division required to hold a section of front and several needed to mount an offensive. However, 21st century conditions are different.

A Corps comprises two or more divisions (40,000–100,000 troops) under the command of a lieutenant general, corps general or US Army three-star general. The Corps is perhaps the biggest army formation still relevant in modern warfare. 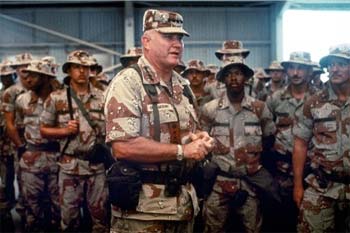 In theory, an Army is a formation of two or more corps, between 200,000 and 600,000 strong and commanded by a field marshal or US four star general. In WW2, armies were associated with geographical theatres of operations, such as the seven German armies that invaded Belgium and France in WW1 or the British 14th Army that fought in India and Burma between 1941 and 1945.

However, the increased combat power of small and medium-sized formations, the influence of airpower and the increasingly coalition-based and asymmetric nature of modern warfare are combining to make armies redundant. Even with four corps effectively under command in the First Gulf War in 1991, General Norman Schwarzkopf did not lead an Army but a 'command' (United States CentCom).

Similarly, the invasion of Iraq in 2003 was a two corps operation under 'Coalition Forces Land Component Command'. An operation that in the 1940s or 1950s would have been allocated around 600,000 troops in a full Army was carried out with less than a third of that number.

We are even less likely to see Army Groups reappear in future. Theoretically comprising two or more armies and up to a million strong, led by five star generals or field marshals, army groups (or 'Fronts' in Soviet/Chinese doctrine) are mainly associated with the titanic struggles on the Eastern Front in WW2. Thus three German Army Groups North, Centre and South comprised the Operation Barbarossa invasion. Later, five Soviet Fronts pushed the Germans back during 1944-45.

Supposedly formed of four or more Army Groups comprising anywhere between a million and ten million troops under a five star general or equivalent, the Theatre now seems the most ridiculous of all Commands. Only the Chinese PLA could even muster that many soldiers.

Yet in some ways, it is actually the most relevant of the 'big formations' since modern warfare involves lots of relatively small and disparate land, sea and air assets deployed over huge operational areas like Western Africa or the Middle East/Gulf region. This is why American armed forces are increasingly organised in regional Commands.

So the Theatre concept remains valid - but the numbers no longer add up.

Continue on to part 2 of our guide to armed forces formations, where we look at the navy.

Q: You have mixed up the seniority of Generals. A Major General is the junior rank (one star). Above that is Lieutenant General (two stars). Why? Because 100 years ago the full name of the lower ranked General was "Sergeant Major General".

A: Hi, Adrian. The article doesn't actually say that major-generals outrank lieutenant-generals. The point was that command of equivalent formations tends to be given to more senior generals in European Armies by comparison with the US Army, where a major-general (two star) might be given a divisional command that would be reserved for a lieutenant-general or full general in the British Army. This probably reflects that the Americans have a lot more divisions to command.

You're quite right to point out that in both the British and US Armies, the seniority of generals goes counter intuitively, with Lieutenant-Generals (US 3 star) being senior to Major-Generals (2 star), who in turn outrank US Brigadier-Generals (one star). The last rank is the equivalent of a Brigadier in the British Army. Full generals (US 4 star) outrank all three, with the 5-star US General of the Army (a rank theoretically reserved for wartime) equivalent to the British Field Marshal. Similarly, Lieutenant-Colonels are outranked by full Colonels.

Interesting point about the etymology of Major-Generals. So Gilbert and Sullivan's Stanley should have been "the very model of a modern sergeant-major general"? It doesn't really scan, does it?