ml to Grams / Grams to ml 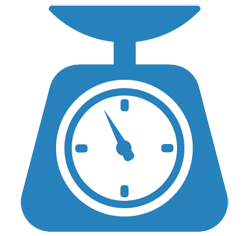 Converting between ml and grams for water is a simple 1:1 conversion process. This is because one gram of water equals exactly one milliliter. For other ingredients, the density of the ingredient needs to be factored in. As an example, whilst 1ml of milk measures around 1.04g, 1ml of honey measures around 1.42g.

How to convert ml to grams

To convert milliliters to grams, multiply the volume (in ml) by the density of the ingredient (in g/ml). You need to factor in the ingredient density because some ingredients are denser, and therefore heavier, than others. E.g. 150ml of sugar weighs less than 150ml of honey.

The formula for converting milliliters to grams looks like this:

Let's look at a real world example of a milliliters to grams conversion.

Example: Mabel wants to convert 15ml of milk to grams. She finds that her milk has a density of 1.04 g/ml. Her calculation is therefore as follows:

Although the milliliter is a unit of volume and gram a unit of weight, we've shown that it is possible to convert between the two, providing you know the density of your ingredient. Note that the density unit needs to match the other units in the conversion - g/ml (or g/cm³). If it doesn't, you will need to convert it first.

In its section of cooking measurement tips, The National Institute of Standards and Technology's Office of Weights and Measures recommends using kitchen scales to measure dry ingredients by mass (weight), rather than measuring by volume, to maintain accuracy. This is because the density of the ingredient can vary greatly. 1

If you don't have access to a set of kitchen scales, or your recipe only gives ingredients in milliliters, you can calculate the weight in grams by using our calculator.

How to convert grams to ml

Example: Mabel wants to convert 5g of yeast to milliliters. She finds that her yeast has a density of 0.95 g/ml. So, her calculation looks like this:

Mabel remembers there are 4.9ml in a teaspoon (US). She therefore adds 1.1 teaspoons of yeast to her recipe.

To convert between other cooking units including grams, pounds, cups, tablespoons, teaspoons and more, give the cooking converter a try.