home » units » articles » how much does a gallon of water weigh?

How Much Does a Gallon of Water Weigh?

A gallon of water weighs roughly 8lb, but the precise weight varies according to its level of density, which in turn depends on its storage temperature. Learn more about the weight of water - and try out our water weight calculator and reference chart - when you dip your toe into our handy guide...

How much is a gallon of water?

If we're talking about the weight of a gallon of water, we need to be clear about what a gallon actually is.

For the sake of the question, 'How much does a gallon of water weigh?', we are going to focus on the American gallon (160 fl oz).

How much does water weigh?

And wouldn't it be wonderful if it really was that straightforward?

What is the weight of a gallon of water? 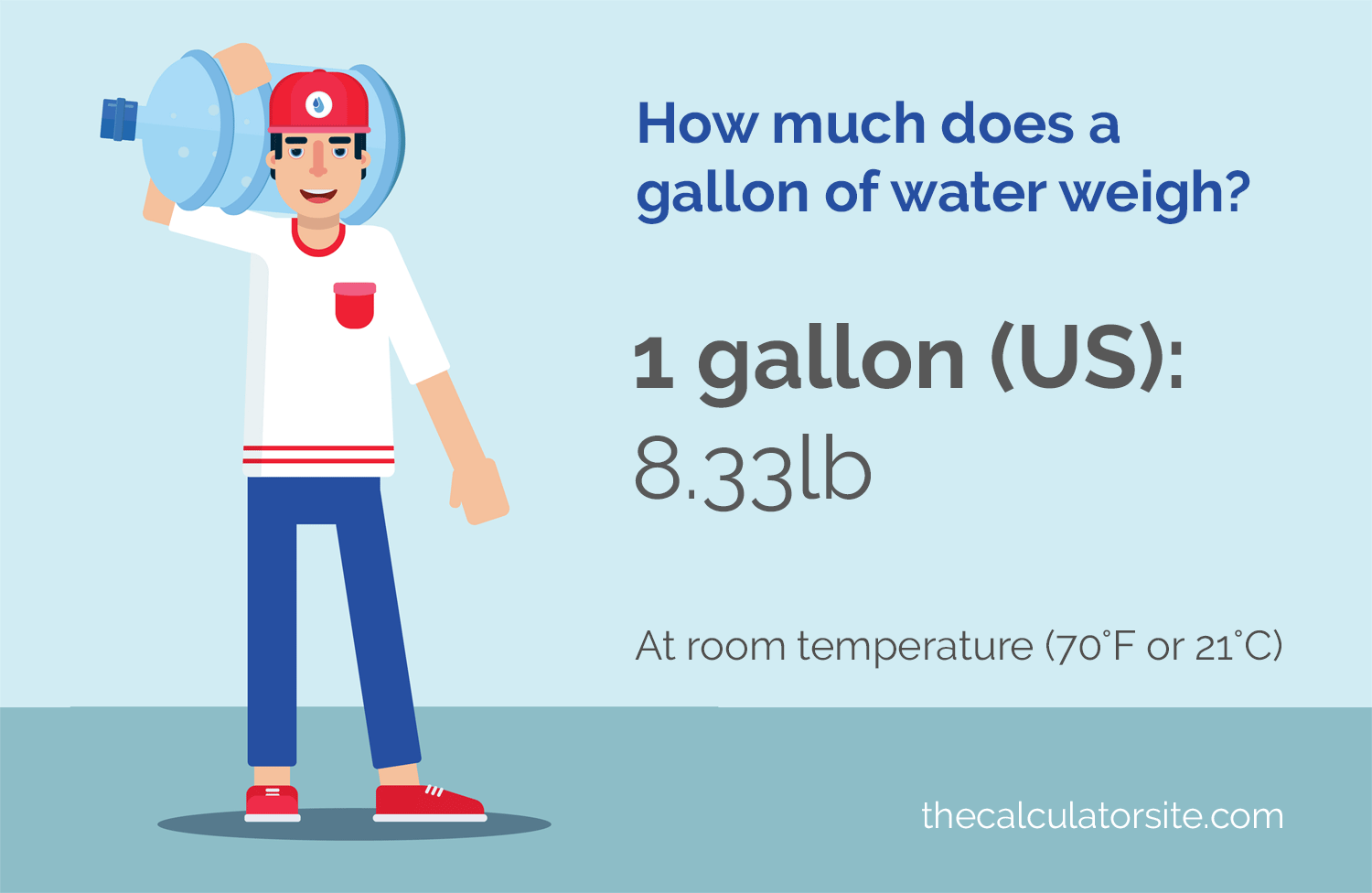 What changes the weight of water?

As you'll know from boiling water on the hob, or freezing it into cubes, water can change its state. These are extreme examples, but even moderate fluctuations in temperature do have an effect on the behaviour, and therefore the weight, of water.

Similarly, just as the weight of water would be different on land, at the bottom of the ocean, or on the moon, atmospheric changes have an impact on its mass.

How does temperature affect the weight of water?

When you heat up water, you increase its energy. Basically, water molecules get excited and start bashing each other around like a crowd of rabid shoppers on Black Friday. The amount of space each molecule now needs is greater, because they're spinning around, high-kicking and elbowing one another, instead of standing calmly in line. So increasing the energy (i.e. heat) of water decreases its density. Molecules become more spaced out.

Therefore, if you have a gallon pitcher that you fill with cold water from the tap, it will weigh more than a pitcher of boiling water. The density of the cold water is greater, so more molecules fit in a given space (the gallon pitcher) than would be in the hot water.

I tried it myself in the kitchen just now, using a pint glass. A pint of cold water weighed 560g, but a pint of hot water weighed just 530g. Less water fit in the glass. (I guess the lesson here is to order a pint of warm beer if you're trying to cut down on alcohol, in which case, we Brits are some really health-conscious folks.)

Alright, but... How much does a gallon of water weigh?

Check out the reference table below to see how gallons of water translate into pounds and kilograms, and try out our water weight calculator yourself!

Convert gallons of water to weight

Convert gallons of water to pounds, ounces, grams and kilograms using the calculator below. This links in to our water weight calculator.