We conclude our run down of military formations with a look at air force formations. As a reminder, we've separated our guide into three sections:

Air Force formations are a lot more complex than one might gather from movies or reading histories of the two World Wars, where the emphasis was very much on the squadron (or 'staffel' in German parlance).

There is also a noticeable variation in the command structures of the world's air forces, depending on their histories.

This is because in the beginning all air forces were treated as regiments of the national army, or sections of the navy. The sooner these air components gained their independence as services in their own right, the more likely they were to adopt an aviation-oriented command and formation structure. 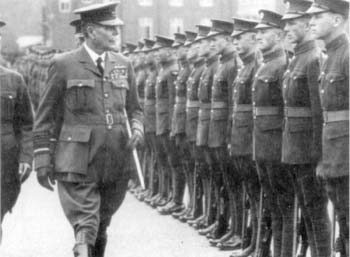 The first Marshal of the Royal Air Force, Sir Hugh Trenchard, inspects his airmen in 1924.

This was followed by Italy's Regia Aeronautica (1923) with the French Armee de l'Aire and German Luftwaffe, both formed in 1933. The Russians, who had been poised to lead the way with the Imperial Russian Air Service formed as a separate fighting arm in 1912, regressed after the Revolution, with the air service subsumed into the Red Army and thereafter organised on military lines, complete with 'Fronts', 'Armies', 'Divisions' and 'Regiments'.

In America, airmen remained firmly under the control of the Army (Army Air Force) and Navy (US Naval Air Corps) until the establishment of the US Air Force (USAF) in 1947.

These varied histories mean that each country's air power was organised on quite different lines during and after World War 2, and these distinct heritages leave their mark on their formation and rank structures to this day. 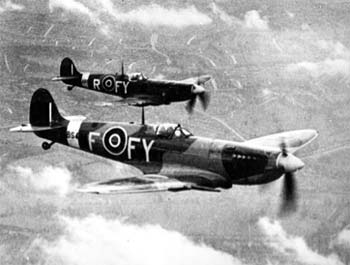 Learning from the Luftwaffe: RAF Spitfires in rotte formation over Kent

Formation sizes and types have also been shaped by different doctrines of how to fight in the air.

An early example of this was the RAF's organisation of air formations into 'vics' of three aircraft, leading to squadrons of 12 aircraft, comprising four 'flights' of three airplanes.

In contrast, the Germans, learning from combat in Spain, decided that the basic formation was the rottte pair, leader and wingman, with these two elements formed into the 'finger four" (schwarm) formation, with either three or four schwarms to a squadron (staffel).

During World War 2, as the doctrine of area bombing took hold, air formations became ever larger, as bombers clustered together in tight formation for mutual protection.

Formations of hundreds of aircraft lumbered through the skies, as scores of attacking and escort fighters fought ever bloodier battles around them. 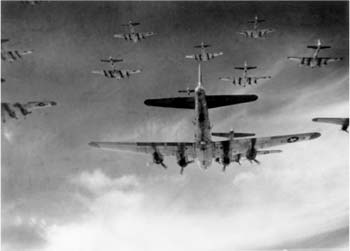 With the coming of the jet age, as speeds increased and firepower became more and more deadly, so formations thinned out. In the jet age, the basic fighter formation was back to just two aircraft, leader and wingman.

For the bombers, too, less had become more, with a single B-52 or B-2 stealth bomber potentially carrying in its bay a nuclear payload with more explosive power than all the bombs dropped on Europe between 1939 and 1945.

This conveys a further truth about the mathematics of air power - that the unit inflation of cost and destructiveness dwarfs that of navies and armies. 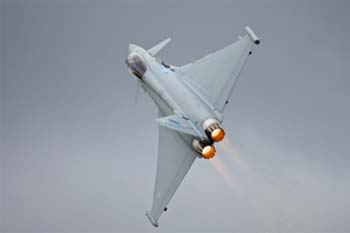 Whereas the destructive radius of an aircraft's armament (guns and bombs) was measured as a few metres in 1918 and in scores of metres by 1945, today's aircraft can shoot each other out of the sky at ranges of up to 100 miles and lay waste to square miles of cities and terrain.

And whereas naval units have escalated in cost five-fold since WW2, and tanks ten-fold, today's leading edge aircraft cost around 100 times more than their WW2 ancestors. Today's Eurofighter Typhoon boasts a fly away unit cost of around £65m, compared to around £620,000 (adjusted) for its 1943 namesake.

Airforces do more work on the ground than they do in the air, so the basic unit of airforces is not the aircraft but the individual airman. Starting from there the essential hierarchy of an air force, working upwards, looks like this:

This is the smallest element of an air force; two to four personnel under the command of a junior NCO.

Also called a 'section', this is a group of five to 20 personnel, under the command of a Junior Officer or Senior NCO, collectively carrying out some task, such as servicing an aircraft.

This is the basic aviation unit, a group of four to six aircraft of the same type, supported by between 20 and 100 people, all under the command of a Captain, Squadron Leader (Sqn Ldr) or Flight Lieutenant (Flt Lt).

The basic organisational unit of an air force and the main measurement unit of its fighting strength. Each squadron consists of three or four flights, making a total of between eight and 16 aircraft, though some specialised squadrons such as AWACS or reconnaissance units have fewer aircraft. Squadrons are commanded by Lieutenant Colonels in the USAF and by a Sqn Ldr or Wing Commander (Wg Cdr) in British-style air forces.

Three or four squadrons form either a Group (RAF) or Wing (USAF), commanded by a Group Captain or Wing Commander. Each group deploys up to 48 aircraft, including some single aircraft like Airborne Warning or Electronic Warfare aircraft attached direct to the wing. A Wing can have up to 1,000 people under its command.

In Russia and China, several squadrons can be combined as a Regiment or Brigade.

In somer air forces, notably USAF and Soviet-style air arms, two or more wings, groups or regiments form an air division, containing from 100 to more than 300 aircraft and more than 3,000 personnel under the command of an air force Major-General.

In the RAF, a number of groups and all assets of a certain type can be combined into a 'Command' (e.g. Strike Command, Transport Command) under the leadership of an Air Vice Marshal. In the USAF and other air arms, regional or tactical groupings of several wings or divisions can form a Regional or Minor Air Force (e.g. US 8th Air Force or 2nd Tactical Air Force in WW2 ) under the command of Generals.

The former Soviet Air Force was organised as a series of Air Armies, while China's People's Liberation Army Air Force (PLAAF) is organised into a series of Military Regions, commanded by Air Marshals.

The top level of command is the entire air force, comprising all its major Commands, Air Forces, Air Armies or Military Regions. The RAF is led by the Marshal of the Royal Air Force, while other nation's air arms are commanded by Air Chief Marshals, or Generals.

That brings to a conclusion our guide to military formations of the armed forces. If you haven't yet read the sections about the army and navy, please see the start of the article here.