Convert between cups and grams and find out how many grams there are in a cup of flour, sugar, butter or other baking ingredient.
Like this? Please share

How many grams are in a cup?

Are you a 'cup half-full' or a 'cup half-empty' kind of person? Hopefully, you're the former, because it's going to take some patience, hope and determination to get to grips with the concept that is cooking with measuring cups.

In the UK, cups have rarely been used in recipes since the 1960s. If it's an old UK recipe, it'll use the imperial cup (284.131ml), which is significantly more than its more modern 250ml metric cup counterpart, now referenced in the UK as well as Australia, New Zealand, Canada and the rest of the Commonwealth.

In the US, it's 236.59ml in recipes, but 240ml on nutritional labelling. Still with me? The mess begins before you've even cracked an egg.

With all this confusion around cup sizes, weighing in grams becomes a much easier and more accurate way to cook. It also helps you ensure your cake doesn't turn out somewhere between a concrete slab and a chocolate omelette. After all, depending what country your cups are from, how tightly you pack the ingredient in, and whether the top is heaped or levelled, baking can become a bit of a roulette game. And cake is not something to be messed around with. Not on my watch, brother.

As baking brethren, we need to stick together. So, we're being super kind and providing you with some cup to gram conversions, which you can find below. These conversions assume that your ingredient is being spooned into the cup and reference the US cup (236.588). We've also included measurements for cups to ounces for good measure (pun intended).

How to convert cups to grams

Let's look at how to convert a cup measurement to grams to get you a Bake Off-worthy cake.

To calculate the grams from a recipe given in cups, it's vitally important to consider what the ingredient is. A cup of ball-bearings will weigh much more than a cup of feathers (though both make for delicious pancake toppings, my toothless cousin tells me). Therefore, there's no single gram equivalent for a cup; salt can be as heavy as 300g, while fresh breadcrumbs would only come to 60g. It all comes down to the density of the ingredient.

To convert cups to grams, multiply your cups figure by 236.588 and again by the ingredient density (in g/ml). If your density is not in g/ml, you will need to convert your density figure first.

Let's look at an example of how to convert cups to grams (using a US cup).

Example: Mabel is baking a Victoria Sponge cake and wants to convert 3 cups of all-purpose flour to grams. She finds that her all-purpose flour has a density of 0.529 g/cm³. Her calculation is therefore as follows:

You can use the reference tables below to assist you with converting your recipe ingredients from 1/4, 1/2, 3/4 cups to grams, or vice-versa. Note that we also have other tools to help you convert grams to tablespoons, teaspoons and milliliters.

Weighing scales at the ready, let's go through the most common baking ingredients in turn...

How much is 1 cup of sugar in grams?

One cup of granulated sugar measures around 200 grams or 7.1 ounces. One cup of powdered sugar weighs around 121 grams or 4.2 ounces.

How much is 1 cup of butter in grams?

Note that we also have a conversion chart for sticks of butter.

How much is 1 cup of flour in grams?

One cup of all-purpose flour measures around 125 grams or 4.4 ounces. One cup of bread flour weighs around 130 grams or 4.6 ounces. 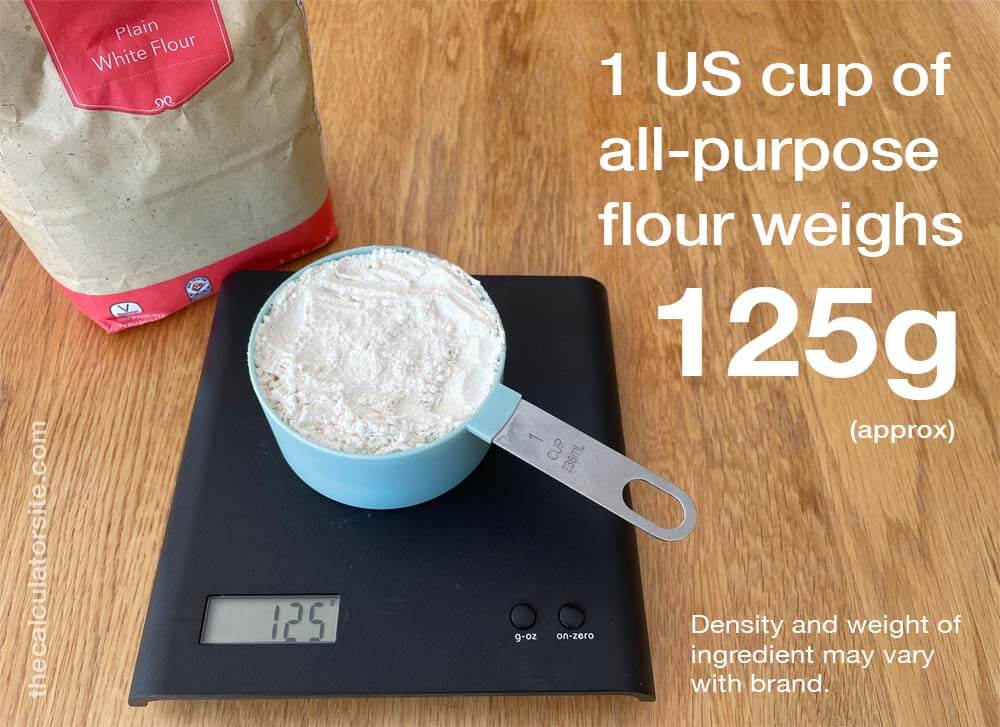