Use this calculator to convert watts to amps. Choose from both alternating current (AC) and direct current (DC) flows.
Like this? Please share

The formula for converting watts to amps is:

How to convert watts to amps

To convert watts (electrical power) to amps (electrical current) at a fixed voltage, you can use a variation of Watt's Law formula: Power = Current × Voltage (P = IV). By working backwards, we get the equation: amps = watts ÷ volts, which can be used to convert watts to amps. 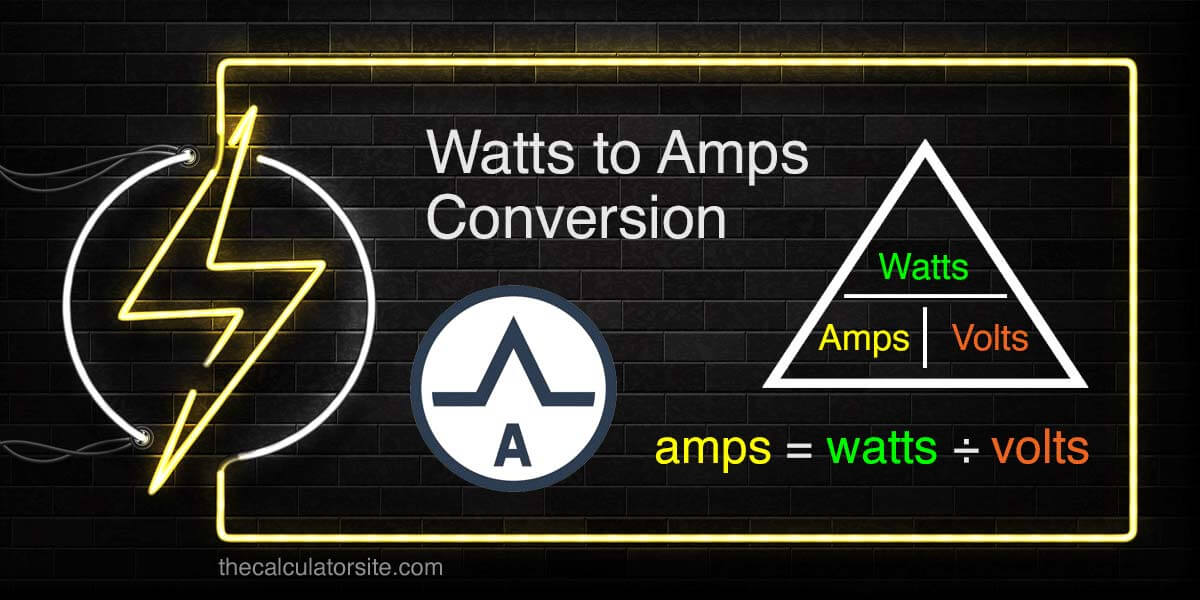 To help understand the conversion of watts to amps, let's go through what each of these units represent.

Watts represent the amount of energy produced by the amps and volts working together. Multiplying amps (water volume) by volts (water pressure) gives you the wattage (the resulting power or energy). A water wheel would turn faster and longer, generating more energy if it uses increased water volume and higher water pressure; the same applies to the wattage if amps and volts are increased.

Volts are a unit to measure force. They measure the force required to make the electrical current (amps) flow. In the hose analogy, the volts would be the water pressure. North American homes typically use 120V for their electrical supply, whilst 230V is common across many other countries.

AC stands for alternating current, when the current periodically changes direction. In Northern America and Western Japan, this usually happens 60 times per second, or 60Hz / hertz. In Europe, the UK, East Japan and most of Australia, South America, Africa and Asia, the current changes direction 50 times per second, which is 50Hz. Power supplied to homes and businesses uses AC supply.

Let's go through some examples to help nail the conversion process.

If you’re working with larger units, you need to remember that 1 kilowatt is equal to 1000 watts. The formula for Watt’s law stays the same, just as long as you express the wattage in watts (your sum will go wrong if you use ‘5W’ to mean ‘5KW’; you need to use 5000W instead).

Before we carry out our conversion, we need to convert 2.4 kilowatts into watts. 2.4KW = 2400W. We can then run through the formula...

Converting watts to amps is simple, really, but if you’re feeling short-circuited after all those numbers, just use our watts to amps calculator at the top of this page.

This page has been reviewed by Derek Bulled, Director of CDS Electrical and an approved electrician with over 30 years of experience.

If you have any problems using our watts and amps calculator, please contact us.