Menu
home » units » articles » us gallons and imperial gallons - why are they different?

US Gallons And Imperial Gallons - Why Are They Different?

We all possess points of cultural pride: the UK has castles, afternoon tea and the Jeremy Kyle Show (until recently); the USA has the Grand Canyon, the Empire State Building and milk-chugging. So while Brits struggle to keep their food down as they watch toothless families brawling over secret affairs and stolen mopeds, Yanks struggle to keep from vomiting after downing a gallon of milk in 60 minutes. But why might an American chugger have an advantage over an English one (if their nation ever chose to adopt this fine tradition)?

US gallons are different to the imperial gallon

It all comes down to the small print. If the milk-chug challenge is to keep a gallon of the white stuff down (and frankly, this is not recommended, in spite of how much calcium it might contain), then the definition of 'gallon' becomes quite important.

In the Americas, a gallon is equivalent to 128 fluid ounces or 3.785 liters (American spelling). But in the UK, it's 160 fluid ounces or 4.546 litres (British spelling). That's quite a difference, with the British contenders having to potentially guzzle down 20% more milk than their American counterparts. You can see the full conversion table of US and UK gallons, ounces and liters/litres here, as well as gallons to cups over here. This volume of milk is a terrifying prospect for a 60 minute period, as our stomachs can usually only hold around 1.9l: that's 0.42 UK gallons, or 0.5 US gallons, making the milk challenge a ten-fold near-impossibility, destined to end in tears (or puke, at least). 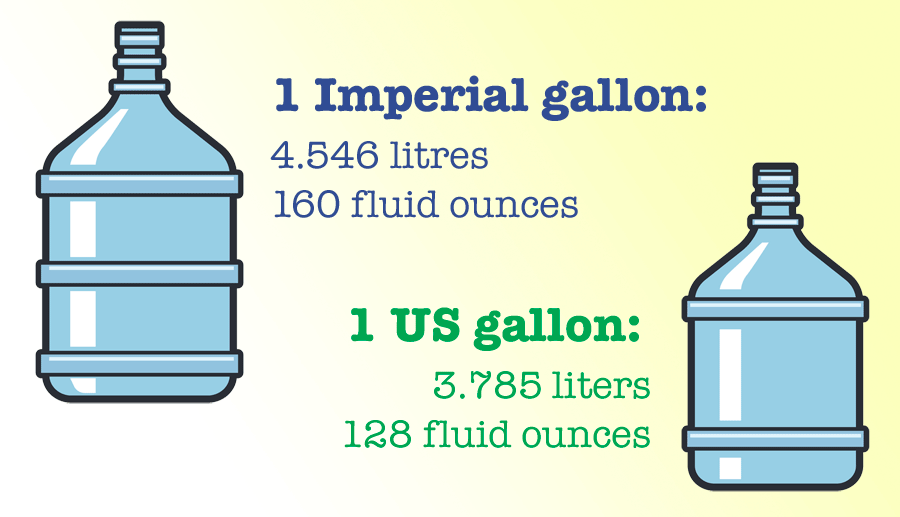 But why is it that you say potato, and we say potatoh? Why is 'football' one sport over here and a totally different one over there? Why is a gallon not a gallon? Am I even real any more, or just an animation of a reflection of a hologram?

Think of language mapped out in a kind of family tree. Once, hundreds of years ago, British people and American colonialists were all perched on the same branches of the family, way at the top of the tree, speaking the same language and walking the same land. Then a bunch of people from the UK went and settled in the US, and for a couple of hundred years, had very little contact with the original branch across the ocean. Just as stories, recipes and traditions evolve and grow in different segments of different families, so does language.

Way back - at the time we all lived together - we had used the Queen Anne's gallon of 3.785l to measure wine. We also had different volumes and names to measure both beer and grain. When we realised that this was silly, in 1824, the UK chose a single imperial term and lumped together all three measurements, picking a roughly-average volume and calling it a gallon. American colonists, though, stuck to tradition and kept just the Queen Anne's volume for their own gallon definition.

A ten-gallon hat does not hold ten gallons. It's actually from the Spanish galón, which means braid or plait, and is named for the decoration around the hat.

The world's largest boiling river must be a great place to cook eggs without increasing your energy bills. Based in the unspellable Deildartunguhver, Iceland, these hot springs spurt out 245 litres (54 UK gallons / 65 US gallons) of scalding hot water every single second.

The largest smoothie ever produced was an effort by Cabot Creamery Cooperative, who used 3200 bananas and a lot of ice and yoghurt to make 1514.15 liters of beverage. Members of the public pitched in by pedalling the bicycles that powered the blenders, resulting in 400 US gallons, or 333 UK gallons of delicious banana smoothie (that fortunately, nobody was forced to drink within 60 minutes).

The most expensive liquid in the world is apparently scorpion venom, which retails (where? Walmart?!) at $38,858,507.46 per US gallon. Best wait until Black Friday to stock up for next year.

Should you wish to try out some conversions of your own, we have converters for liters to US gallons and litres to UK gallons.