Menu
home » units » articles » how many beers are in a keg?

How Many Beers Are In a Keg?

The chances are you've arrived at this page trying to do some research for an upcoming party, wedding or other event that's going to involve a lot of people. In which case, you're likely to be wondering how many kegs you need to order to satisfy your crowd of beer-thirsty compadres.

Of course, it could also be the case that you've been on a massive drinking binge and you're keen to discover just how much liver damage you've sustained. In which case, the best thing you could do right now is brew a strong coffee and relax with our fascinating explanation about how many beers a keg can actually hold.

In the US, where beer is a main food group (the other one being donuts, according to one scholar cited as H. Simpson), a keg can hold 58.66 liters of beer, or 15.5 US gallons. That's the equivalent of a whopping 165.3 standard-size (12oz) US cans. Way to get the party started!

These keg sizes are for the US and use the US gallon, fluid ounce and pint. 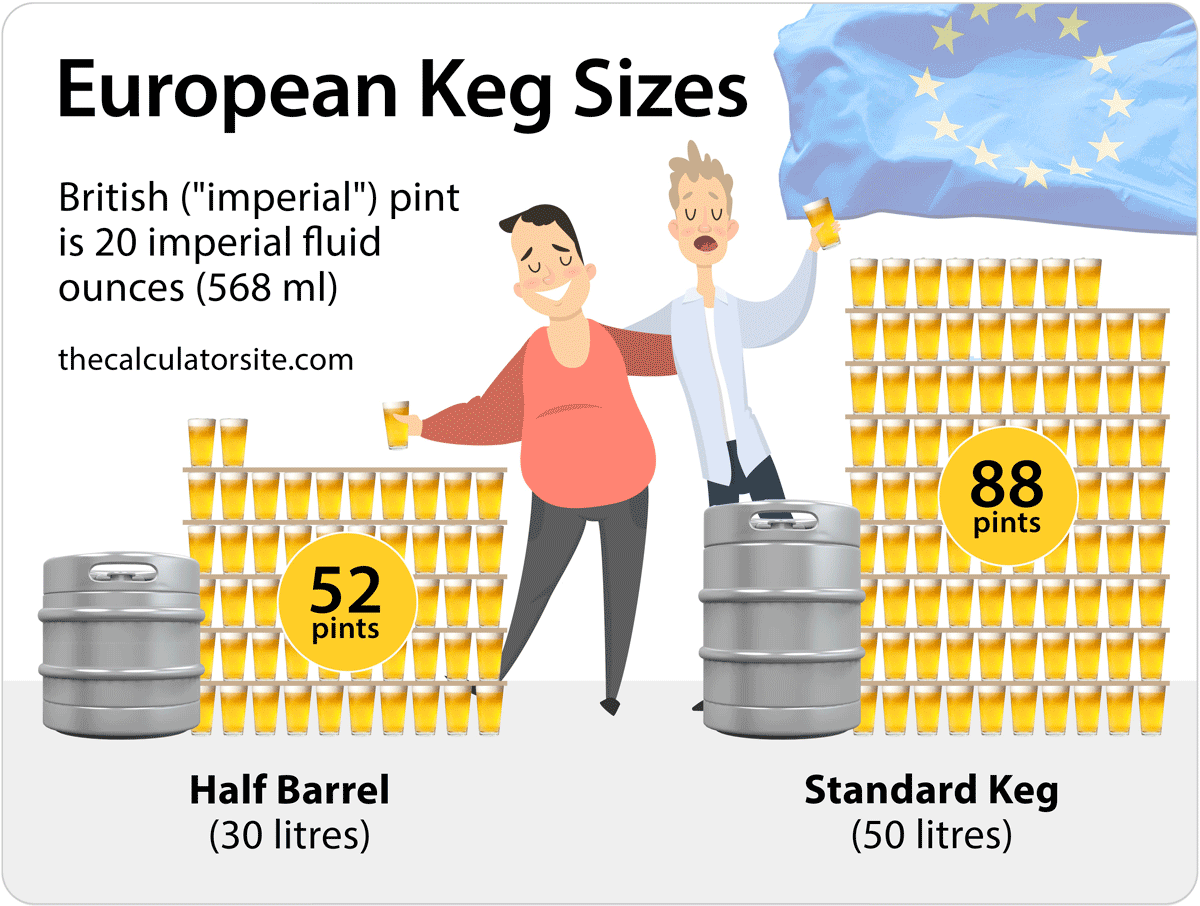 The following traditional English brewery casks use the imperial gallon and pint.

Speaking of America, their fondness for beer translates into a whole host of keg sizes, the one described above being a standard "keg" (a cute little nickname for its full moniker, 'Kegmeister Keggington of Kegsville, Kegger Extraordinaire'). Or maybe not, but since the others have more interesting titles, I didn't want ole' keggy to feel left out. Brace yourself: there's the sixth barrel (or a sixtel), the eighth barrel, the pony keg (or quarter barrel), the one-way keg, the mini keg, the beer ball and the Cornelius keg. Ridiculous, but true. 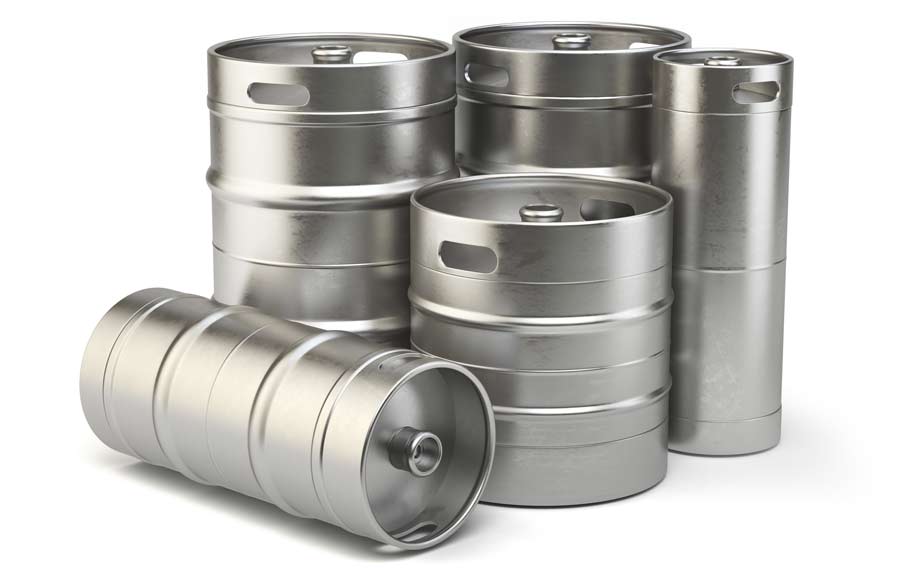 With an eighth, a sixth and a quarter barrel, you might wonder: why no half barrel? Well that's our friend, the keg. Sure, its name is nothing to write home about, but it's the most popular keg at every party. It might be half a barrel but it's a whole lot of action.

The quarter barrel is true to its name and holds half a keg's-worth (7.75 US gallons), while the less common sixth barrel contains 5.16 US gallons. The impressively-dubbed Cornelius keg found its feet as a soda barrel, but is now more common amongst home brewers. It can hold 5 US gallons, which is - apparently - the same as 10 64oz growlers (I say apparently because terminology differs between the US and the UK, hence having to qualify gallons as "US gallons" throughout this article - they're different, y'know).

In Europe, a standard keg holds 50 litres of beer, or 13.2 US gallons (11 imperial gallons). In pub parlance, that's almost exactly 88 pints. Another round?

When it comes to beer festivals in the UK, the kilderkin is commonly used for calculating beer quantities. A kilderkin is 144 pints.

How many kegs do I need?

In summary, you can't have your keg and eat it. You have to drink it, dummy! The question is how many kegs you need for your party (and where's my invite?!). 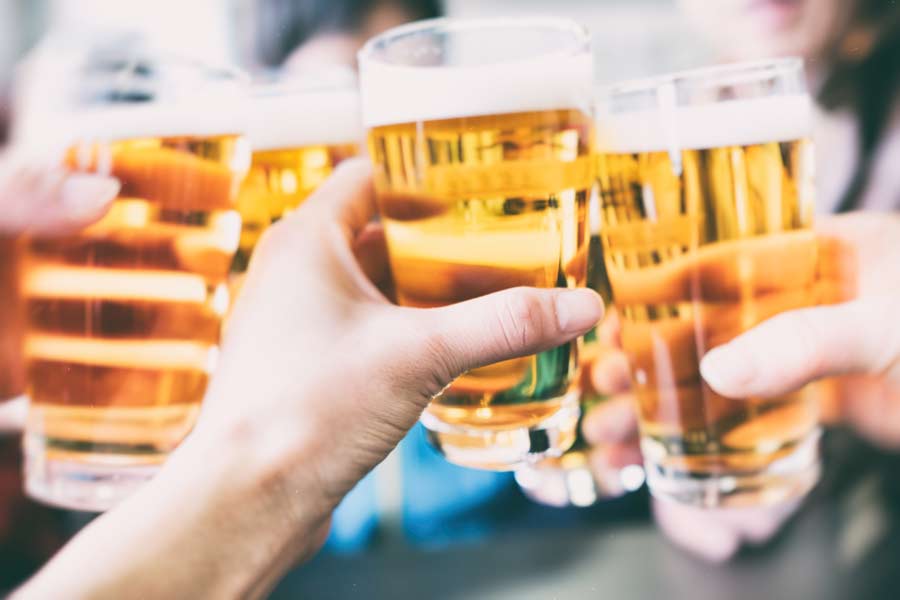 It has been suggested that a general guideline for serving alcoholic drinks at a party is to plan for each guest to consume two drinks in the first hour and one each hour after that. Of course, there may well be heavy drinkers who imbibe more beer than that (probably easiest to just set them up an IV drip!), but it should be balanced out by those who drink less.

Let's try an example. If you're organising a party in the US for 40 guests that is likely to last 3 hours, and you're only serving beer, your calculation could look like this:

If you intend to serve a variety of beverages at your party, you'll need to decide how popular each drink is likely to be and split the guests accordingly. Then, use the above rule of thumb for your beer drinkers.

This is a good tip. Consider supplementing your beer supply with bottles, or use them as a backup incase your keg runs dry. The big benefit here is that, should you not use them on the day, you can keep them for the next time (something you can't do with a keg).

Now, where's that keg of coffee?