Menu
home » units » articles » how many grams of sugar are in a teaspoon?

How Many Grams Of Sugar Are In a Teaspoon?

Mary Poppins once famously claimed that, "A spoonful of sugar helps the medicine go down", but given that the children in her care were subsequently treated for multiple cavities and type 2 diabetes*, could she have made an error in her calculations? Don't find yourself in the same situation, defending your childcare credentials in a court of law; instead, read on to find out exactly how many grams are in a spoonful of sugar, and why Brits might just be sweeter - or perhaps more bitter - than Americans.

(* This could just be a vicious rumour, but where there's smoke, there's fire.) 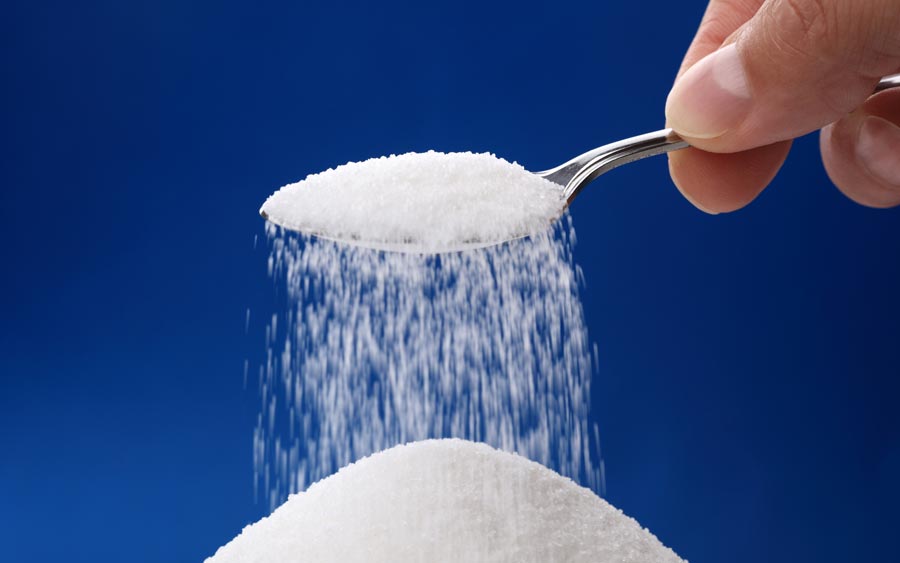 You know, spooning is not just for lovers, and this article goes out to all the carb-watchers, calorie counters, saccharine sweetiepies, fructose fiends, dessert-downing darlings, syrup-loving sirs and nectar-loving honeys all over the world. Tuck in.

What nationality is your teaspoon?

Before we begin with the conversions, we need to open up a philosophical wormhole: what even is a teaspoon? Imagine here: the famous Magritte painting of a pipe, captioned "Ceci nest pas une pipe", except it's a piece of small silver cutlery, captioned, "This is not a teaspoon. No, really, it's not."

In the grand US of A, where so much stuff makes so much sense (removing redundant 'u's from words like 'colour', and building streets in blocks rather than the winding, roundabouted nightmares of Britain), teaspoons are universal. They are all made the same, and they all measure the same, whichever state or house or restaurant you're in. Sensible right? Well, perhaps, although it would be much neater if every single teaspoon in America measured 5ml, as opposed to 4.92892159375ml, but you can't win them all.

In the UK, a teaspoon is whatever the fudge you want it to be. Is it a small stick with a scoop on the end? Brilliant, chaps, you have yourself a teaspoon! In any home, a cutlery drawer might have 3 or 4 different sizes all fitting within the realms of what a teaspoon is, so it's a little harder to pinpoint. In days gone by, the UK referenced the imperial teaspoon (5.919ml) in recipes. Now, however, it's the metric teaspoon that's most commonly used. A metric teaspoon is 5ml (nearly 20% smaller than the old imperial one).

By the way, here's a super handy cooking converter which might just save your sanity next time you're trying to convert a recipe.

Now that we've got the transatlantic awkwardness out of the way, we can do some math(s).

Often, consumers are given information by weight: sugar could be listed in grams (metric) or ounces (imperial) in recipes, as well as in ingredients lists on food products. Sometimes this is convenient, but other times, you might find yourself whipping up a batch of cupcakes without scales to hand, or you're on a reduced carbohydrate diet and want to quickly work out how many spoons of sugar are in a can of cold drink.

Whether you're interested in naturally occurring sugars (which could give you a pretty high number on a glass of fruit juice, for example) or added, refined sugars (I'm looking at you, delicious brownies) the calculation remains the same. 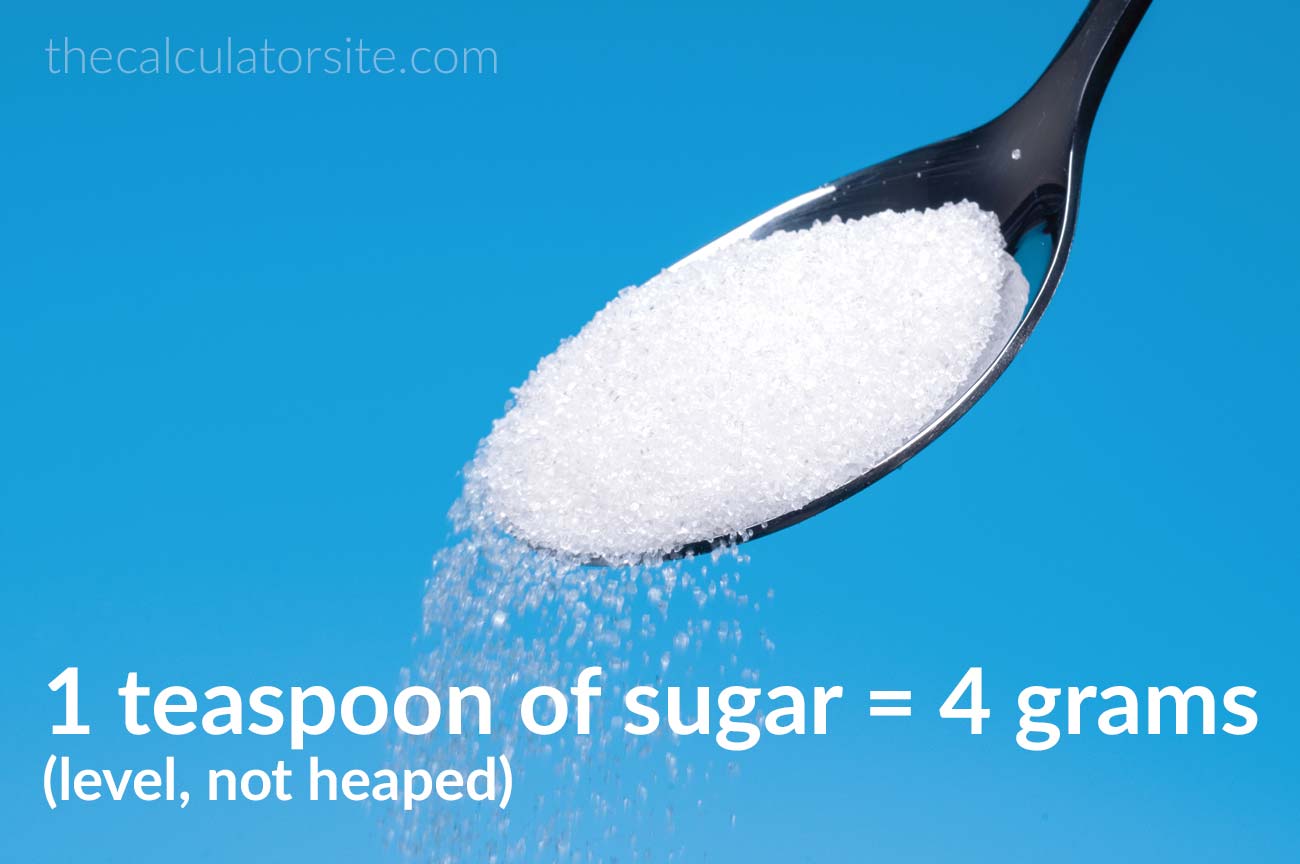 How many grams in a teaspoon of sugar? 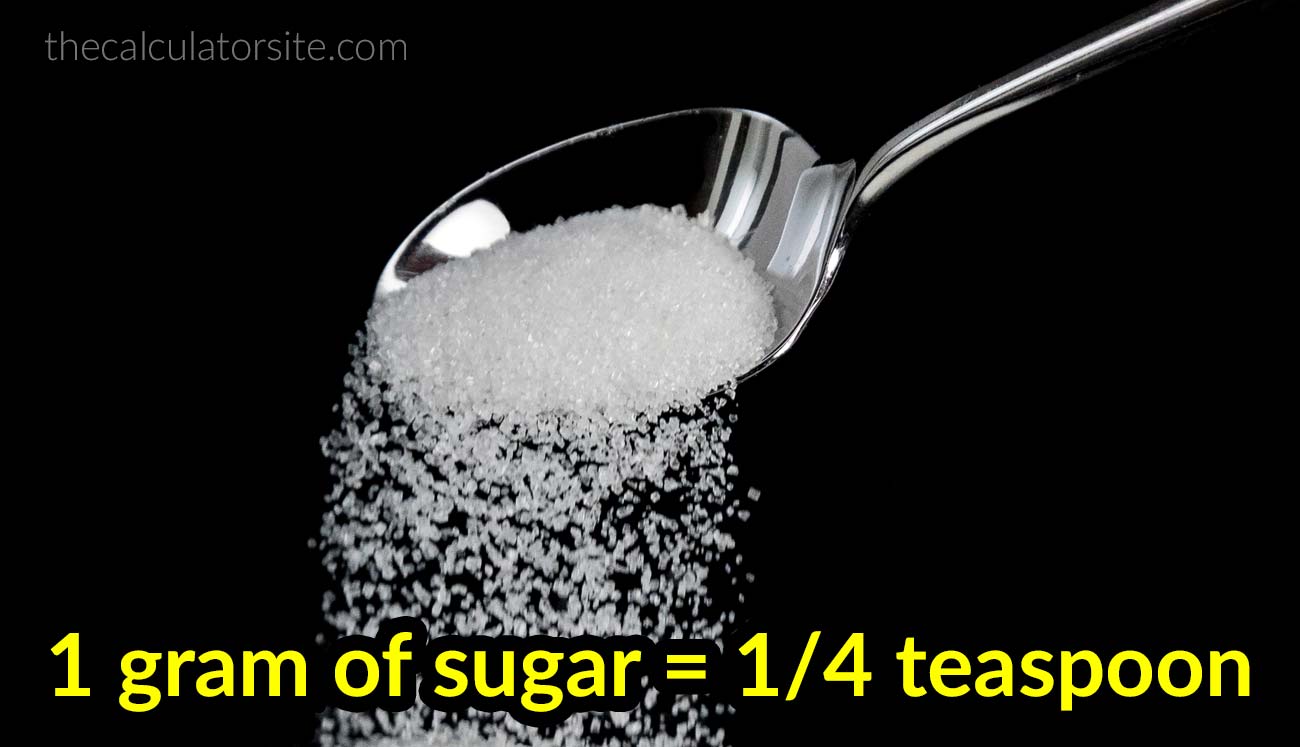 How to convert grams of sugar into teaspoons

Grams ÷ 4 = no. level teaspoons of sugar

Even with the UK/US discrepancy, it's minor enough to keep this conversion accurate unless you start working in kilos of the stuff - it's just important to be aware that outside the US, a teaspoon could be significantly different to the official version (if you used a non-standard 6ml teaspoon in the UK, it could overdo the sugar in your recipe by 20%).

Should you need to carry out a conversion, you can always use and bookmark our own teaspoons to grams converter and grams to teaspoons converter tools.

1) Mary's peanut butter cookie contains 14g of sugar, and she wants to know how many doses of medicine, according to her mantra, would justify eating it. She divides 14 by 4, getting the answer 3.5. She takes 3.5 level doses of unnecessary medicine, and then eats the cookie. Mary is hospitalised, and the sugar is the least of her problems. 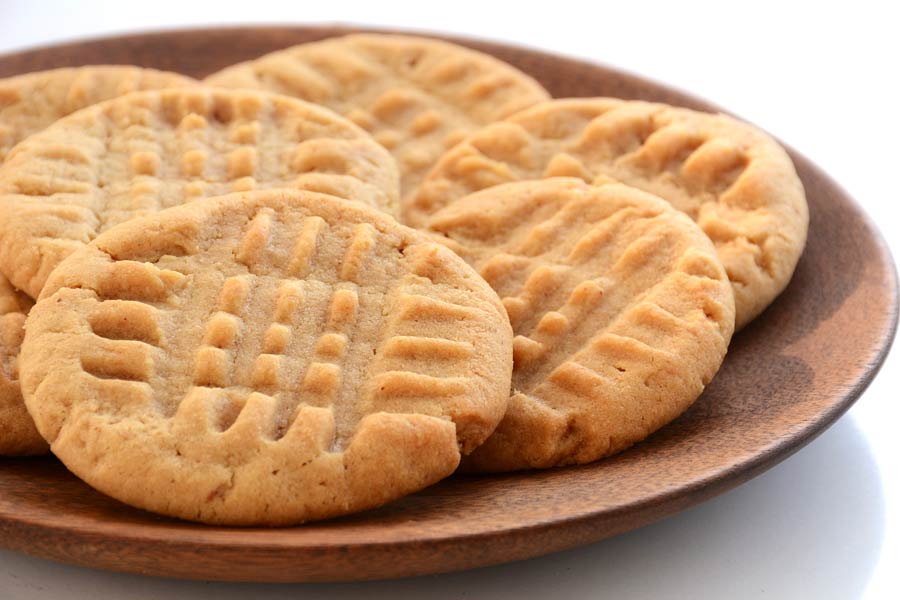 Here's some I baked (and scoffed) earlier...

2) Mary is baking for the children and the pie recipe calls for 120g sugar. She divides that by 4, getting the answer 30. She begins counting the 30 level spoonfuls before she is removed from the household and questioned as to why she is still nannying when her licence has been officially revoked.

I hope this provides a clear idea of how to easily convert between grams and teaspoons. Until next time, I'm off to apply for the Great British Bake Off...

Our media seems to love to exaggerate sugar content in food, for they don't want facts spoiling a good story. Taking your metric volume of a teaspoon being 5 mL (that is a level teaspoon) and multiplying that by the bulk density of white household sugar as 845.35 mg/mL (not to be confused with the density of dry sugar which takes into account the air between the crystals and that is about 1.59 g/mL) the answer is a staggering 4.23g which we could generously round to 4g.

In other words, those glorious pictures you see of heaped teaspoons are NOT 4 grams. In fact, I have measured some 400 heaped teaspoons of sugar (rejecting any spoons that could not be taken as true (whatever that means) teaspoons) and found an average of 7.56 g for heaped teaspoons, with a standard deviation of 0.6 g and a little over 4g for level teaspoons.

If our media wished to be intellectually honest and wanted to use such pictures then 100 mL of Coca Cola in my country, where there is 10.6 g/100 mL in a 330 mL can, would contain 31.8g or just 4.2 of those heaped teaspoons the media loves to use to illustrate their biased reports. It is time for decent reporting using precise units.

You can read more about the misrepresentation of sugar intake in the media in this article.