Menu
home » other » articles » how to read roman numerals

How to Read Roman Numerals

You have to hand it to those Romans; for an empire that crumbled away at least 1,500 years ago they've left us with a heck of a legacy. And one of 'the things that the Romans have done for us' is to leave us a numbering system that, though occasionally mystifying, is still proving remarkably useful.

Let's take a look at Roman numerals; where they came from and how to use them.

Note the absence of any symbol for zero. This is partly because the numeral zero is already built into the existing symbols and also for the Romans, numerals were for counting, rather than calculation. In the Roman mind, anything that had a 'zero' value was by definition not a number, and therefore could be expressed by the Latin words nihil or nulla, meaning 'nothing'.

It's easy to believe, mistakenly, that Roman numbers were abbreviations of the Latin words like centum (hundred) or mille (thousand) but these were the only overlaps with the language. It's more likely that the words came from the symbols and that those came from somewhere else. But where?

Most historians and archaeologists are agreed that the Romans derived their numbering system, like so much else, from their Etruscan forebears.

The Etruscan numbering system had five symbols, three of them shared with Roman. 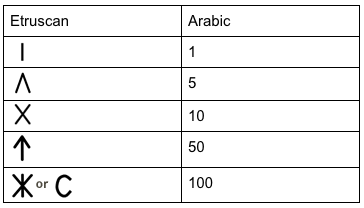 As to how these symbols evolved, there are three main theories.

The first theory is that the whole numbering system derives from notches on tally sticks, with a single notch (I) representing a single event and every fifth notch double cut (V) and every tenth one cross cut (X). This would have produced the positional system seen in Roman numbering. As for the more advanced symbols, these could have evolved later, being fitted with letters of the Latin alphabet.

An alternative hypothesis is that the small numbers in the Roman system are related to hand signals with I, II, III, IIII corresponding to the number of fingers held up for another to see and V representing the whole hand with fingers together and thumb apart. Numbers 6–9 represented one hand held up as a V and the other showing fingers for the additional units and finally a 10 represented by two Vs, crossing the thumbs, or holding both hands up in a cross.

These symbols could be used to express any given value, by combining them. Combinations are defined by a set of rules.

There are three basic rules for constructing Roman numbers.

You can see the basic rules in operation in the progressions from one to ten and from ten to a hundred.

The subtractive notation rule (placing a small number in front of a large one to decrease overall value) is itself subject to three sub-rules:

So how on earth could the Roman numbering system with no zero and no single value above one thousand be used to express a really large number, such as a million? Well, the world was a much smaller place in those days and there would have been less need for really large values. Nevertheless one would expect an ingenious and supremely practical people like the Romans to have developed systems to crack that problem and in fact they had two.

If you want to convert roman numerals from the apostrophes system to vinculum system, or vice-versa, you can use this converter from ConvertUnits.com.

Rather confusingly, while the Romans counted in tens (decimal system) for whole numbers but counted in twelves (duodecimal) for fractions, probably because 12 is divisible by both three and four. The basic unit for tractions was the twelfth or uncia, from which we get our "inch" and "ounce", represented by a dot or dash following the whole number. One dot was 1/12, two dots were two twelfths (one sixth) and so on up to 5/12. Six twelfths were abbreviated as S for semis ("half") and then more uncia dots were added to the S for the remaining fractions up to eleven twelfths.

Should you wish to convert to or from roman numerals, or check your own conversion results, why not use our much loved roman numerals converter tool?