Meters And Metres - What's With The Spelling?

"Your music sucks," you screamed at your parents as you scoffed at their Beatles records and played Duran Duran at full volume.

The younger generation always wants to improve on the past, making their own mark on the world.

"Your spelling is SO STUPID!" America hollered down the stairs at its lame older brother, Great Britain. "Why do you put all those pointless 'u's in 'color', 'humor' and 'labor'?"

Yes, today, we are talking spellings across the pond. Some readers might have noticed apparent misspellings in our articles, especially with commonly used units of measurement like 'liters' ('litres') and 'meters' ('metres'). But it's not so much an error as a difference in opinion. Read on to see why... 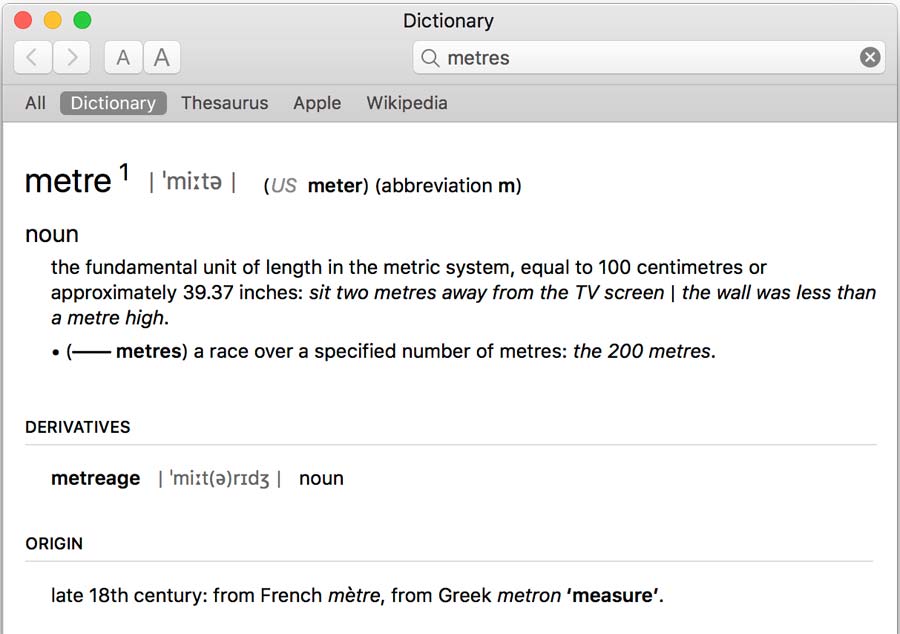 The definition of 'metre' from Apple's OSX dictionary.

When British English borrows a word from another language, it typically likes to keep the origins visible (provided the language has the kind of status that Britain might want to borrow, of course). It's a bit like spending a lot of money on a designer coat and never removing the tag; you want people to notice where it's come from. Dr. Lynne Murphy, an American linguist living in Britain, calls it a "fashion". So words from French (usually) keep their -our endings and their -re endings, despite the pronunciation not quite matching up. 100cm in British English is a 'metre'.

In American English, there's a tidier system and a desire to have spelling match pronunciation more closely, so words with French origins get assimilated into the American style: 'theatre' becomes 'theater', and 'colour' becomes 'color', and - you guessed it - 'metre' becomes 'meter' (this one actually isn't French, but from the Greek 'metron').

Is this a colourful theatre auditorium or a 'colorful theater auditorium'?

This seems like it should tie up the matter (mattre?) quite neatly, but no.

In British English, a 'metre' is 100cm, while a 'meter' is a tool for measuring. A parking meter charges you for the time you spend in a parking space, a barometer measures weather, and a gas meter keeps track of how much energy you're using to heat your house. Clearly the words are closely related in origin and meaning, but have taken on different spellings within the one variety of English.

'Meter' as a word is a lot older than the metric system. It is first recorded by the Oxford English Dictionary in 1336, meaning a person who measures things. Suddenly the -er ending makes even more sense, just as a 'baker' is one who bakes, and a 'painter' is one who paints. As this was before the printing press came along and standardised spellings, it has been variously recorded as 'metar', 'metare', 'metere', 'meter', 'meetre', 'metter', 'meeter', 'mettar', 'mettare' and 'metter'. So frankly, if you think that having two ways to spell the word now is bad, be thankful you weren't around in Chaucer's time. Eventually, Britain settled on 'meter' for someone or something that measures.

The metric system didn't come along until the very end of the 18th century, when America had already been colonised by British immigrants and their mother tongues. Americans would have had the spelling 'meter' from the 1336 sense of the word, so they simply chosen to retain that spelling when they adopted a word to measure in 'meters'. Back in Blighty, though, the choice was made to use an -re ending for the unit 'metre' (first recorded in 1797), possibly to reflect the Greek etymology of the word, or even the French origins of the metric system itself. The OED has the origins of 'kilometre' from the French kilometre (1795), so it's quite possible that we took the unit names as part of a package deal from France.

Litre is another unit of measurement in the metric system, this one is a little more straightforward. Unlike 'meter'/'meter' which already existed with a slightly different meaning in English, 'liter'/'litre' had no predecessor confusing things. The first use of 'litre' is recorded by the Oxford English Dictionary in 1797, and the spelling was kept consistent with 'metre'/'meter' in each variety of English: the US went with -er and the UK went with -re.

Phew! Glad we've got all that cleared up. Now can somebody explain to the giggling Brit over there why their American friend hasn't done anything shameful by "showing their best pants to the priest"?