Airline Baggage Weight - Why Does It Matter? 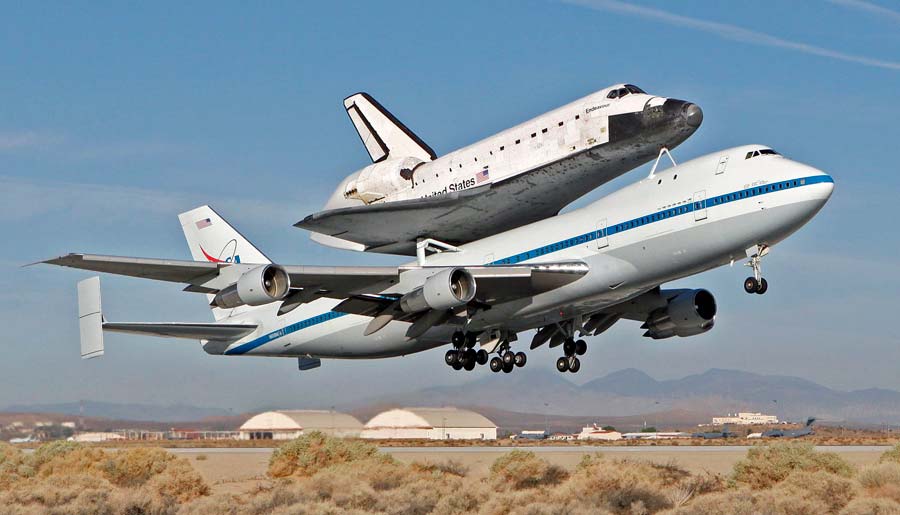 This one started with one of those email forwards derived from someone's flippant Facebook or Twitter posting. It featured a photo like the one above and a caption that (stripping out the swear words) read:

This set us to thinking: are aviation baggage limits actually linked to aircraft capacity or are they just a useful extra revenue earner for airlines?

Well, we've done the calculations and the results are quite surprising - even a little disturbing. They perhaps back up Samoa Air's decision to be the first airline in the world to charge customers by body weight as well as luggage weight in 2013. Some industry sources claim this concept could be the future for air fares. Time will tell.

Let's start with that Shuttle Orbiter, whose dry weight is around 78,000 kilos (Like most airlines, we'll keep all the numbers metric: it makes life a lot easier).

The carrier aircraft is a Boeing 747 SCA (Shuttle Carrier Aircraft), modified from a standard Boeing 747-100. To equip the aircraft for its new role, Boeing stripped out most of the main cabin fixtures and insulation (though keeping a few first class seats for NASA passengers), added some mounting struts and beefed up the fuselage.

They also added some extra vertical stabilizers to keep the thing flying straight with the Orbiter on top, as well as some more powerful engines. They even added an escape tunnel system for the flight crew (although they had to remove it later, after it became clear that the escape trajectory was unlikely to take the hopeful parachutist much further than the fan blades of one of the inboard engines).

Plainly (planely?) these modifications were sufficient to allow a Boeing 747 to carry a 78-tonne spaceship, implying that the basic aircraft could so so as well.

Maximum takeoff weight is 333,390 kilograms. That's the total weight that the wings and engines can lug into the air. But the airframe weight in airline trim is 162,400 kg. so the net lifting capacity is 170,990 kg - still enough to carry almost three Orbiters! 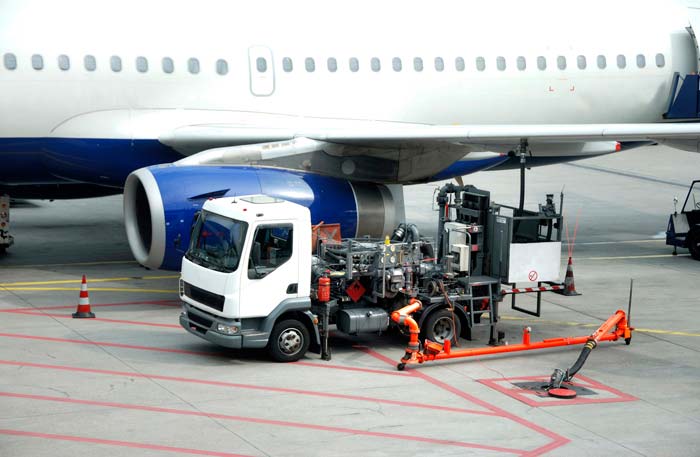 In order to calculate the weight of a maximum fuel load, we need to find out what kind of fuel was used and then apply a conversion factor. Your basic common or garden jet fuel is Jet A or Jet A1, with a density on the ground of 0.804 kg per liter. Thus the weight of a full fuel load is just under 147.5 tonnes. Suddenly, that lifting capacity isn't looking so generous after all. Now we're left with actual carrying capacity of a mere 23,552 kilos. You can deduct a further 240 kilos for the weight of a three man flight crew (though a three woman flight crew would only weigh 175 kilos).

All of which explains why even the stripped out SCA had a very short range, having to go coast to coast in hops of little more than 1,000 miles at a time with the shuttle on top.

And how does that net payload of 23.5 metric tonnes cope with long haul airline service? The short answer is - it doesn't. Airlines don't like to make passengers get on the scales at the Check In Desk, so they work to a basic rule of thumb of 79 kg per male and 57.6 kg per female, adding 3.6 kg clothing weight to each person in summer and 6.4 kg each when wrapped up for winter. Children up to 12 are counted as 34 kilos each all year round.

In airline trim, the 747-100B could carry 412 passengers in two classes or 266 in three classes. Plainly that first configuration isn't going to work for London to LA, with a basic passenger weight (assuming 220 male, 175 female, 32 minors) of more than 28 tonnes, even in short sleeved shirts and summer frocks.

In three class configuration, we might have better luck. Now the weight of passengers comes down to just over 17 tonnes (130 male, 110 female and 26 minors) but we're still a little over maximum takeoff weight - with everyone bare-ass naked and without their luggage.

Quite apart from preserving decency, that's a major problem because the baggage also weighs a lot. Each passenger and crew member has a carry on bag weighing an average 7 kilos: for our flight that comes out at 1,975 kilos - nearly two tonnes!

Then you have the hold bags. If you allow each of the 200 Economy passengers one suicase at 30 kg and 66 First Class/Club Class given two hold bags at 50 kg each, that would weigh in at a grand total of 12.6 tonnes. We're now around 16 tonnes over weight and will have to offload close to 20,000 liters of fuel to get airborne. Forget LA - we might make Chicago O'Hare.

So how do they manage to get long haul aircraft into the air?

Basic answer, the 747-100 wasn't a genuine long haul jumbo. It could do max fuel or max passengers, but not both. In really long haul mode, it would have been restricted to more like 220 passengers in three classes.

Admittedly, the 747-100 was a comparatively primitive jumbo. The numbers for the current 747-400 are more impressive:

So now we have a minimum of just under 54 tonnes payload, which is a little more comfortable - but not for 412 passengers in three class configuration. 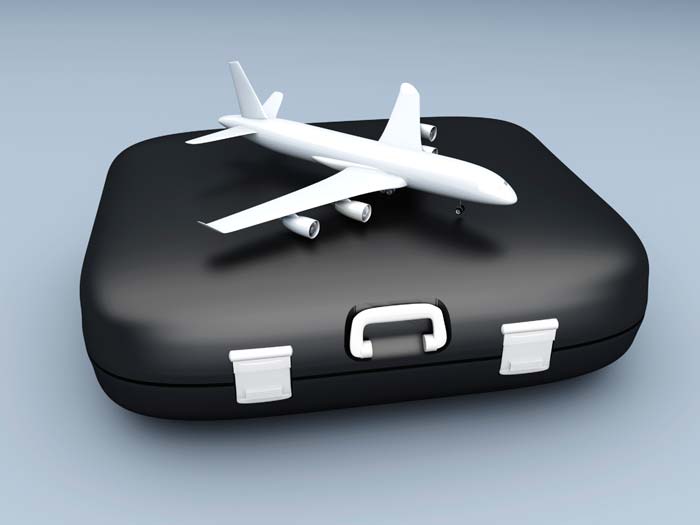 Now your basic passenger weight is around 29,000 kg. Flight crew and supplies remain as before, around 7,200 kg.  Everyone's carry on bags weigh some 3,000 kilos.

Oh dear, we're only left with around 15,000 kg available to cope with all that hold baggage, which in this case (or rather, wheelie cases) could weigh 300 x 30 kg plus 112 x 100 kg average (for those in the plush seats) for a total of more than 20,000 kilos. Better start offloading passengers if you want to fly London-Tokyo non-stop... and pump out fuel if you want to fly somewhere nearer.

If all this wasn't enough, the passenger baggage doesn't go anywhere near filling the cargo hold so airlines want to carry air cargo as well.

Furthermore, all that weight (fuel, passengers, baggage and cargo) has to be distributed carefully around the aircraft to avoid over-stressing the airframe and preserve basic ability to maneuver in the air.

One final point - what happens if the aircraft gets into trouble and has to make an emergency landing? Maximum landing weights are lot less generous than maximum take off weights (a little under 296,000 kg for the 747-400). And while the crew might be able to dump fuel, they won't be able to lighten the aircraft any other way. They might need to dump a lot of fuel, too, because the aircraft isn't going to make it back down in one piece with anything much over a quarter fuel load in the tanks.

All of which leads one to a couple of basic conclusions.

The first is that baggage weight does matter. Cases that are overweight not only cost airlines money but can be actively dangerous, with failure to weigh baggage accurately or load it properly identified as a prime cause in numerous fatal crashes.

The second is that the one phrase you will never hear in civil aviation on the refueling stand is: "Fill 'er up, mate".

I've never heard of any fatal crashes where a "failure to weigh baggage accurately or load it properly" was found to be a prime cause of the crash. Can you elaborate?

Yes, there have been several fatal air crashes caused by failure to manage baggage or cargo loads properly. One of the first in modern history was the crash of an Avro 689 Tudor V on March 12, 1950, as it t was approaching Llandow Airport, Cardiff, at the end of a charter flight carrying rugby fans home from Dublin, Ireland. The aircraft was approaching the runway with undercarriage lowered when it abruptly pitched up, stalled and plunged into the ground, some 2,500 ft. short of the runway threshold. Only three of the 83 people aboard survived. The investigation revealed that the aircraft was not loaded correctly with centre of gravity at least 9 ft. behind the aft limit. This became critical when flaps were lowered, shifting C of G even further aft.

Perhaps the most (in)famous air crash concerning excess baggage weight was that of Arrow Air Flight 1285, a Douglas DC-8 jetliner on a charter carrying US troops from Cairo, Egypt, to their home base in Fort Campbell, Kentucky, via Cologne, West Germany, and Gander, Canada. On the morning of Thursday, 12 December 1985, shortly after takeoff from Gander, the aircraft stalled, crashed, and burned killing all 248 passengers and eight crew — one of the deadliest single air accidents in history. The Canadian Aviation Safety Board (CASB) investigation determined probable primary cause as ice build-up on the wings with underestimated onboard baggage weight as a significant contributory factor (the soldiers' baggage was calculated using standard passenger scales, when returning from tour they were carrying much heavier military loads).

More recent and less controversial instances of excess baggage weight causing loss of an aircraft include:

January 2003: US Airways Express flight 5481, a Beech 1900d commuter aircraft, crashes on takeoff from Charlotte, N.C., found to be 400 to 1,000 pounds overweight, with two exceptionally heavy bags loaded in the tail baggage compartment.

August 25, 2001: The air accident that killed R'nB singer Aaliyah and eight others. The report from Bahamian investigators released by the National Transportation Safety Board found that the twin-engined Cessna 402B was "significantly overloaded" when it crashed shortly after take-off from Marsh Harbour Airport, Bahamas. They found the plane with baggage, fuel and passengers was substantially exceeded permitted gross takeoff weight and again the Cessna was out of balance with too much weight in the tail area.

There have also been accidents caused by failure to secure loads properly, notably loss of a chartered National Airlines Boeing 747 Freighter N949CA that crashed on take-off from Bagram Air Base, Afghanistan, on 29 April 2013. NTSB investigation determined that the rearmost of five armoured military vehicles shifted rearward because it was inadequately restrained, sending the aircraft into an irrecoverable nose up attitude.

In general, though, dangerously excess baggage or cargo weights mainly affect smaller and prop-driven aircraft due to their lower power reserves (a 747 can actually fly, though not take off, on just one engine) and also usually appears as a contributory factor, combined with loss of lift or control impairment from some other cause.