The weird and wonderful world of units of measurement 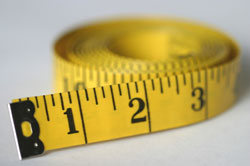 For many centuries, humankind has been measuring stuff. OK, it might be a stretch to imagine a neanderthal taking notes to see if his cave would accommodate an Ikea corner sofa (this is totally unrealistic: we all know he was too busy self-importantly prodding the bison steaks on the barbecue while his poor, hairy wife was left with such mundane domestic tasks). But there is nonetheless a fascinating history to how modern-day measurements came about.

In a totally illogical and non-chronological order, here's a potted history of how some seemingly-bizarre units of measurement came into being, and actually may not be so random, after all.

Origins of the yard

One of our most commonly used units, the yard, was defined in the 1100s by English King Henry I as the distance between the tip of his nose and the thumb of his outstretched arm. I don't want to throw shade on the guy, but if you've seen any of his portraits, it might just as well have been the distance from the tip of his nose to the top of his nose. Snort. Oh, by the way, these days a yard is, less subjectively, 0.9144 meters (or metres for our British friends).

Ever heard of a rod? Contrary to popular belief, this unit doesn't rely on getting Rod Stewart to lie down against objects to ascertain whether they are longer or shorter than his 5' 10" frame (6' 6" if you include the hair). His agent has specifically requested that we make this clear: PLEASE STOP TRYING TO BOOK HIM FOR THIS PURPOSE. MEASURE YOUR FIELDS SOME OTHER WAY.

Perhaps you could use the more traditional rod unit, sometimes known as a pole (Roman Polanski's agent would like to make it clear that he is not available to... etc. etc.) Rods - or poles - originated in the Anglo Saxon period, describing the 5.5 yard rod (5.03 meters) which was necessary to jab and poke a team of 8 large oxen to get them moving. Anyone working the land would have had access to one of these poles, and it was a convenient ruler to measure ground with.

The agricultural origins are still clear today as allotments are usually 5 or 10 rods long. A less violent interpretation of the unit was decreed in the 1500s, when it became the total combined length of each left foot from 16 men as they set off home from church on a Sunday morning. Wonderfully specific, don't you think? Oh, and I wouldn't be doing my job properly if I didn't mention that a rod - or pole - can also be called a perch. The common freshwater fish would like to make it clear that he... you get the idea.

Talking of fields and such, 160 square rods is equivalent to an acre, the size of field which could be ploughed in a single day (before industrial machinery). An acre might seem arbitrary at 43,560 square feet, but it's one chain by one furlong. A furlong is 1/8 of a Roman mile, and they used to call it a stadium. A chain is just as it sounds: a metal chain. It had 100 links and was more reliable than cord because it wouldn't stretch. A little heavier to carry around, though...

Hands, feet and the parasang

Time for a pop quiz! How do you think the units "hand" and "foot" came about? You'll never guess. Still struggling? I'll put you out of your misery. A hand was named for the 4 inch width of a typical hand. It's still used today for measuring horses. A foot was named for the 12 inch length of a man's typical foot (wearing shoes). Mind. Blown. Sarcasm aside, both units are pretty handy (boom boom tish!) for measuring things on the fly, hence their longevity.

One of the oldest units of measurements you've never heard of is the parasang, a historical Iranian unit with wildly varying definitions. The earliest recorded mention of the parasang dates from the 1st century. The first century! Imagine how much time you would save across your whole life only having to write one digit for the year, instead of four. I feel cheated. Anyway, a parasang could be any of the following:

It's more of a poetic than a useful unit, but it's fascinating to think about how it came about as an attempt to describe the distance marched by soldiers. Use it next time you need to be vague about directions. "Sure Auntie, you can come to my house party. It's 3 parasangs east of the library..."

Can you fathom the fathom? Used for measuring depths of water, it's the span of a man's outstretched arms. This comes from dropping rope overboard, quickly dispensing each length by pulling it between hands.

When it comes to weight, the US is a bit like the moon in the sense that Brits might find things feel lighter there. In the US, a hundredweight is - of course - 100lbs.

However, in the UK, where bitterness and paranoia reign, people must have been fed up with being ripped off by their no-good-gold-digging (actually coal digging) miners; there, a hundredweight is 112lbs, to account for the extra junk and sludge inevitably mixed in with the coal.

A bit like a baker's dozen (13), another concept invented by the mistrustful English. In the 13th century, a baker could have their hand lopped off as punishment for under-selling you a quantity of bread, so they began to routinely give an extra bun to be on the safe side (because it's pretty hard to knead dough with a hook for a hand).

Naturally, there are dozens, maybe even hundreds more fascinating units of measurement to explore. Here's a little song to help you embrace the absurdity:

When you've got 4 gills then you have really got a pint (or maybe you're just actually a fish...)

If you have 2 pints my friend, then you have got a quart - (of beer or any beverage you wish.)

While four quarts makes a gallon (it says quite plainly there)

2 firkins are a kilderkin (and now my head is spinning)

2 kilderkins: one barrel (for the fish from the beginning?)

A barrel and a half is called a hogshead (like, for REAL)

While two barrels are one puncheon (in the face is how this feels).

The final one, so we can say we've truly cracked this nut,

2 hogsheads are a single butt.