Menu
home » units » articles » how many weeks are in a year?

How Many Weeks Are In a Year?

One year has approximately 52 weeks. A normal year in the 'modern' calendar has 365 days, which, when divided by 7 (Monday, Tuesday, Wednesday, Thursday, Friday, Saturday, Sunday) equals 52.1428571 weeks.

This is all based upon the Gregorian calendar (introduced back in 1582), which cycles every 400 years. If you want to go a step further and work out the average number of weeks in a year across the full Gregorian calendar, you'll find that a year works out at 365.2425 days. When divided by 7 it gives you a total of 52.1775 weeks. 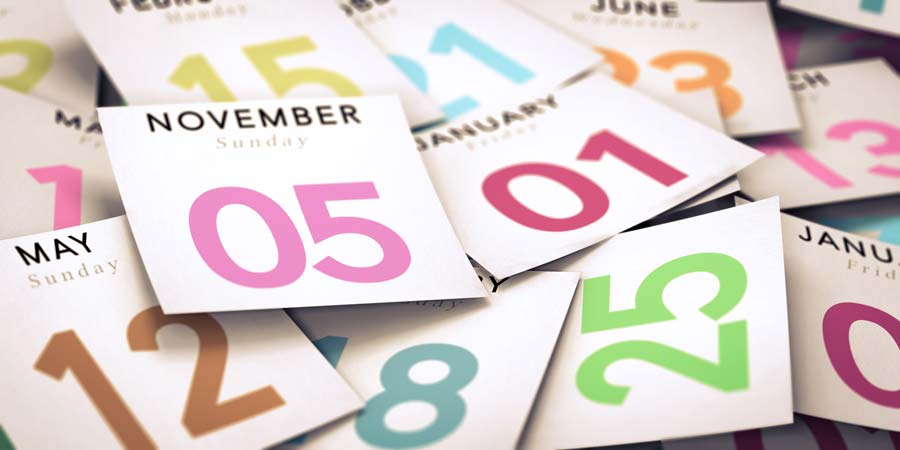 Here's a table to show you how common years from the Gregorian calendar are broken down into weeks and days:

Weeks in a year table

The exception to the "52 weeks" rule pops up if you're using a fancy academic journal or office wall planner; sometimes they number the weeks based on them running from Sunday to Saturday, or Monday to Sunday, breaking up the first and last weeks of the year to fit this mould. Although there are still only 52 weeks in the year, and time doesn't magically slow down**, the way a calendar like that counts fragments at the start and end of the year might mean that the weeks are numbered as high as 54. E.g.:

*An extra note about leap years...

Leap years exist to correct a small margin of error in our annual calendars. A complete orbit of the sun actually takes Earth 365 days and 5 hours, 48 minutes. To compensate for the extra time, every 4 years we add an extra day to the calendar to maintain accuracy (otherwise we would be out by 24 more days every century).

There are 3 criteria to determine a leap year. Julius Caesar introduced the idea 2000 years ago, defining any year which could be cleanly divided by 4 as a leap year. However, this made too many leap years and would still create an imbalance of time, so there is a checklist of 3 features any leap year should have...

In 1752, Europe was using the more accurate Gregorian calendar, which we still use today, but Britain was dragging its heels with the Julian calendar. The big switch happened in September that year, but to catch up with everyone else and to correct the accrued inaccuracy of the Julian calendar, English folk went to bed on Wednesday 2nd September 1752, and woke up on Thursday 14th September 1752. Some sources claim that members of the public rioted, outraged that their lives had been 'shortened' by 11 days! If you want to know how many days have passed since that big switch, by the way, give our days between dates calculator a try.

Years go by so quickly, have you ever stopped to wonder just how many days you've been alive for? If so, you'll be delighted to hear about our funky age calculator tool. Give it a try!