Menu
home » units » articles » the history of the calculator

The History Of The Calculator

Join us as we delve into the history of the calculator - from the Abacus first used by Egyptians in 2000 BC. to the pocket calculator and smartphone of today. Let me hand you over to Nick Valentine...

If you need an illustration of the accelerating speed of technological change, look no further than the electronic calculator, that modest little device that does the most complex sum instantly and that you hold in the palm of your hand.

Or more likely don't any more... for the pocket calculator, which took more than four millennia to evolve and only reached its current form in the 1990s, is already obsolescent, if not actually obsolete. 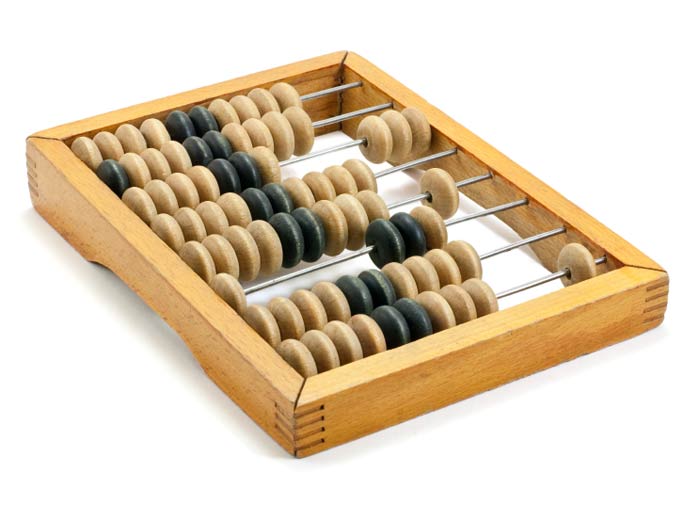 In the very beginning, of course was the abacus, a sort of hand operated mechanical calculator using beads on rods, first used by Sumerians and Egyptians around 2000 BC.

The principle was simple, a frame holding a series of rods, with ten sliding beads on each. When all the beads had been slid across the first rod, it was time to move one across on the next, showing the number of tens, and thence to the next rod, showing hundreds, and so on (with the ten beads on the initial row returned to the original position).

It made addition and subtraction faster and less error-prone and may have led to the term 'bean counters' for accountants.

But that was where the technology more or less stuck for the next 3,600 years, until the beginning of the 17th century AD, when the first mechanical calculators began to appear in Europe. Most notably, the development of logarithms by John Napier allowed Edward Gunter, William Oughtred and others to develop the slide rule. 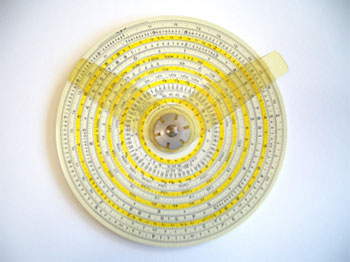 The slide rule is basically a sliding stick (or discs) that uses logarithmic scales to allow rapid multiplication and division. Slide rules evolved to allow advanced trigonometry and logarithms, exponentials and square roots.

Even up to the 1980s, knowing how to operate a slide rule was a basic part of mathematics education for millions of schoolchildren, even though by that time, mechanical and electric calculating machines were well established. The problem was that these weren't portable while the slide rule fitted into the breast pocket of your button-down shirt.

Real Rocket Scientists used slide rules to send Man to the Moon - a Pickett model N600-ES was taken on the Apollo 13 moon mission in 1970.

The first mechanical calculator appeared in 1642, the creation of French intellectual and mathematics whizz kid Blaise Pascal as "a device that will eventually perform all four arithmetic operations without relying on human intelligence."

Pascal's machine used geared wheels and could add and subtract two numbers directly and multiply and divide by repetition. Gottfried Leibniz then spent the best part of his life designing a four-operation mechanical calculator, based on his ingenious slotted 'Leibniz wheel,' but ultimately failing to produce a fully operational machine. 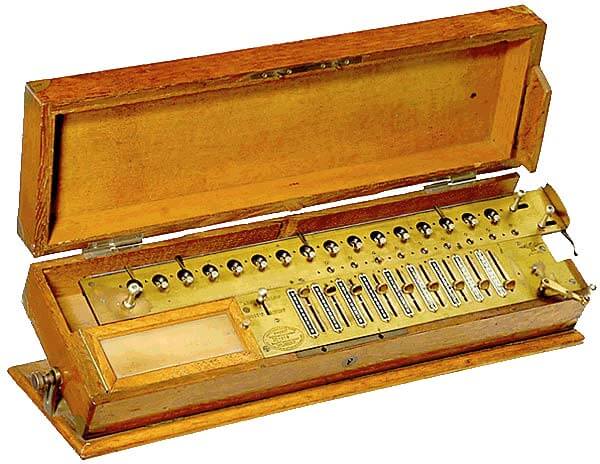 The Arithmometer: Soldiered on till 1915

That had to wait until 1820 and the patenting in France of Thomas de Colmar's four function Arithmometer.

This first commercially viable counting machine was manufactured from 1851 to 1915 and copied by around 20 companies across Europe.

By then, the main tide of innovation had moved across the Atlantic, with the development of hand cranked adding machines like the Grant Mechanical Calculating Machine of 1877 and, more famously the P100 Burroughs Adding Machine developed by William Seward Burroughs in 1886.

This was the first in a line of office calculating machines that made the Burroughs family fortune and enabled the son, William S. Burroughs, to pursue a career consuming hallucinogenic drugs and writing subversive novels like 'The Naked Lunch'. 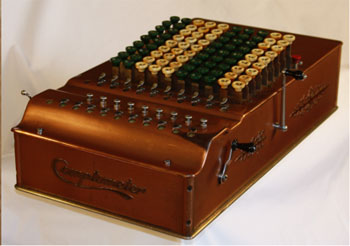 A further step forward occurred in 1887 when Dorr. E. Felt's US-patented key driven 'Comptometer' took calculating into the push button age. This machine, too, spurred a host of imitators.

The Curta calculator, which first appeared in 1948, was perhaps the ultimate expression of the mechanical calculator, so compact that it could, somewhat lumpily, fit into a pocket and was capable of addition, subtraction, multiplication and division.

Machines like this ensured that mechanical calculators dominated 20th century office life all the way through to the late 1960s. By then, electronics were beginning to take over, as we shall see in the next part of this series. 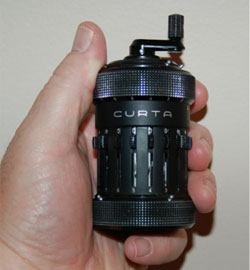 Curta calculator: mechanical could be compact

The story of the electronic calculator really begins in the late 1930s as the world began to prepare for renewed war. To calculate the trigonometry required to drop bombs 'into a pickle barrel' from 30,000 feet, to hit a 30-knot Japanese warship with a torpedo or to bring down a diving Stuka with an anti aircraft gun required constantly updated automated solutions.These were provided respectively by the Sperry-Norden bombsight, the US Navy's Torpedo Data Computer and the Kerrison Predictor AA fire control system.

All were basically mechanical devices using geared wheels and rotating cylinders, but producing electrical outputs that could be linked to weapon systems.

During the Second World War, the challenges of code-breaking produced the first all-electronic computer, Colossus. But this was a specialised machine that basically performed "exclusive or" (XOR) Boolean algorithms. 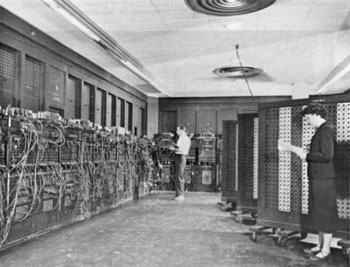 However, it did this using hundred of thermionic valves as electronic on/off switches, as well as an electronic display.

The application of this technology to the world's first general calculating computer had to wait until 1946 and the construction of the ENIAC (Electronic Numerical Integrator And Computer) as a completely digital artillery firing table calculator also capable of solving "a large class of numerical problems", including the four basic arithmetical functions.

ENIAC was 1,000 times faster than electro-mechanical computers and could hold a ten-digit decimal number in memory. But to do this required 17,468 vacuum tubes, 7,200 crystal diodes, 1,500 relays, 70,000 resistors, 10,000 capacitors and around 5 million hand-soldered joints. It weighed around 27 tonnes, took up 1800 square feet of floorspace and consumed as much power as a small town. Not exactly a desktop solution.

Electronic calculating for the office had to wait on the miniaturisation of valves and the development of solid state transistors. 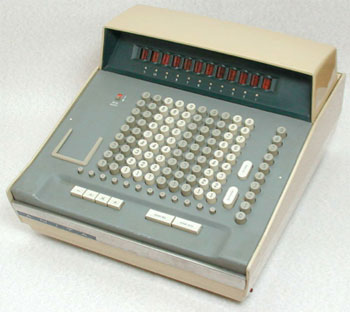 The first step was seen in 1961 with the arrival of ANITA (A New Inspiration To Arithmetic/Accounting). This was the world's first all-electronic desktop calculator and it was developed in Britain by Control Systems Ltd., marketed under its Bell Punch and Sumlock brands.

ANITA used the same push button key layout as the company's mechanical comptometers, but these were the only moving parts. All the rest was done electronically, using a mix of vacuum and cold cathode 'Dekatron' counting tubes.

The illuminated 12-place display was provided by 'Nixie' glow discharge tubes. From 1962, two models were marketed; ANITA Mk. 7 for continental Europe and the Mk. 8 for Britain and the rest of the world, with the latter soon becoming the only model. These early ANITAs sold for around £355 ($1,000), equivalent to around £4,800 ($8,000) in today's money.

Nevertheless, as the only electronic desktop calculator available, tens of thousands of ANITAs were sold worldwide up to 1964, when three new transistorised competitors appeared; the American Friden 130 series, the Italian IME 84, and the Sharp Compet CS10A from Japan. 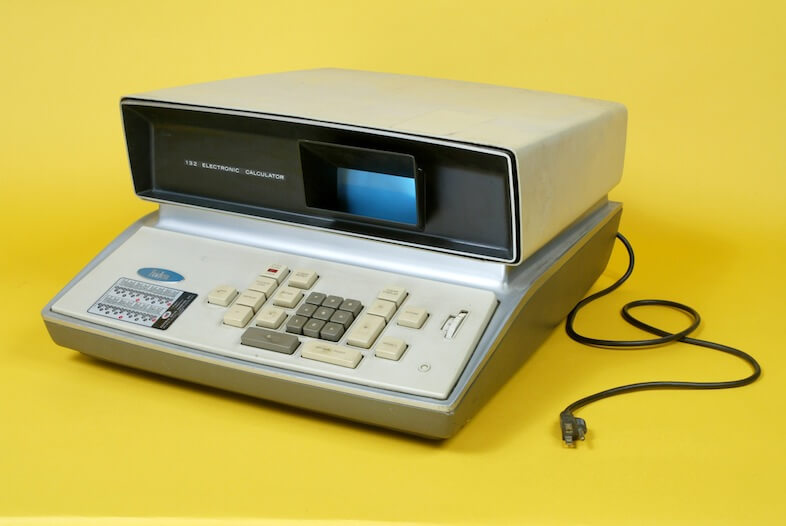 None of these were functionally superior to ANITA, nor cheaper (the Sharp CS10 cost around $2,500 in 1964) but their all-transistor designs opened the floodgates to a new wave of electronic calculators.

These came from the likes of Canon, Mathatronics, Olivetti, SCM (Smith-Corona-Marchant), Sony, Toshiba, and Wang.

Four of these Beatles-era transistorised calculators were especially significant, including Toshiba's "Toscal" BC-1411 calculator, which was remarkable in using an early form of Random Access Memory (RAM) built from separate circuit boards. 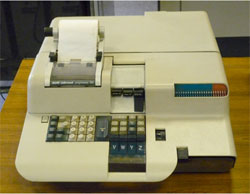 The Olivetti Programma 101 introduced in late 1965 was an elegant machine that won many industrial design awards. It could read and write to magnetic cards and display results on its built-in printer.

As a desktop electronic calculating machine that was programmable by non-specialists for individual use, the Programma 101 could even claim to be the first personal computer.

From behind the Iron Curtain the same year emerged the ELKA 22 designed by Bulgaria's Central Institute for Calculation Technologies and built at the Elektronika factory in Sofia.

Built like a T-64 tank and weighing around 8 kg, this was the first calculator in the world to include a square root function. 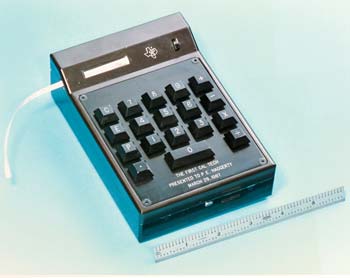 All electronic calculators to this point had been bulky and heavy machines, costing more than many family cars of the period.

However in 1967, Texas Instruments released their landmark "Cal Tech" prototype, a calculator that could add, multiply, subtract, and divide, and print results to a paper tape while being compact enough to be held in the hand.

A new chapter in the calculator story was opening...

Continue on to part 2 of our story of the history of the calculator, where we look at the microchip age and the virtual age.