How Usain Bolt Compares To The Fastest Animals On Earth

You don't need a velocity calculator to know that Usain Bolt is fast, but only when he's competing against fellow humans. 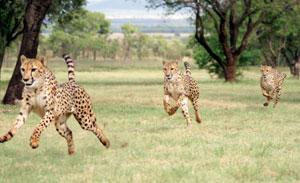 The 100m sprint star of the Olympics is a hero to aspiring young sportsmen and women the world over. But, if you could turn the Jamaican born athlete into an animal, which would he be? A cheetah? A peregrine falcon? A great white shark streaking from the depths to smash into its prey? Actually, you'll probably be surprised to learn than, if nature had its way, Bolt would have probably been born a sloth.

A sloth? How can I say that? At present, he's the fastest man on earth. Let me explain: when it comes to the lottery of life humans are pretty wretched creatures. We're slow moving and susceptible to death in ways that other animals seem to side-step with a nonchalant shrug of their shoulders.

With those points in mind, let's do a side-by-side comparison of Usain Bolt and some of the fastest creatures on the planet and see how the Olympian fares...

The cheetah is the rocket propelled eating machine of the African plains. Nature designed it with speed and agility in mind and there's no doubt about the supremacy of this big cat. Reaching speeds of up to 65 mph, there's not much that can either keep up or outrun it (unless the hunt goes into overtime and then the bets are off - more on that in a minute).

Like Bolt, this is a short distance sprinter. Put the Jamaican athlete up against the likes of Mo Farah in the 10,000 and the outcome would be slightly different and the same applies to the cheetah. Prey creatures such as the Thomson's gazelle can't beat the cheetah on speed but, when it comes to long distance work, they leave the turbo charged big cat standing.

Traveling at nearly 3 times the speed of Bolt at his fastest (23.35 mph) the cheetah takes round one for the animal kingdom.

Dolphins may well be the cuddly guardians of the seas but they're no slouch in the high speed chase stakes. An incredibly smooth, streamlined body is powered through the water by a tail that consists of pure muscle. What's more, dolphins can seemingly communicate using complex signals which makes them highly efficient hunters.

When it comes to speed, the dolphin is kind of like an excellent middle distance runner - plenty of stamina but with enough held in reserve for the final kick towards the finish line. But don't be fooled, this chuckling mammal has a built in turbo charger that can propel it from an idle swim through the maze of the coral reefs to over 35 mph in the blink of an eye.

That means it's about 1 1/2 times faster than Bolt. Notch up round two to the animals.

Think of a fish; a really big fish. Now imagine it rocketing through the ocean faster than the speed limit in a built up area: welcome to the world of the blue fin tuna. Reaching speeds of up to 45 mph, is impressive enough. But what makes this feat of natural engineering really stand is the fact that these fish can frequently reach up to 500 lbs in weight. In fact, Iain McDonald has written in to say:

"The official British record is from Scarborough in the 1930's, with a blue fin tuna measuring 851 pounds. They went extinct in the North Sea during the 1950's, but I think a few turned up off the west of Ireland much more recently.

According to the IGFA (International Game Fishing Association) the official World record for blue fin tuna size is 1496 pounds. Presumably, bigger ones have gotten away..."

As an amusing calculation, Iain thinks that a 1496 pound tuna would make about 2693 "decent sized" 0.25lb cans of tuna steak. Enough to fill a fair few supermarket shelves.

Back to discussing the speed of a tuna now. If you think that nature has endowed the tuna with an incredible turn of speed to allow it to escape hungry sharks you'd be wrong. The blue fin tuna is one of the top predators in the oceans. Prowling the warmer water's, such as the Indian ocean, this apex predator feasts on fast moving smaller fish such as herring, mackerel and sardines (all of which are capable of an impressive turn of speed).

Travelling at nearly twice the speed of Bolt at his best, this fish notches up another point for the animals.

Lucretia Borgia was a political assassin who gained notoriety in the Middle Ages. Killing her opponents (occasionally, friends and family would also feel the chill of her fatal embrace) was the name of the game. You'd be forgiven for thinking that Falco peregrinus was one of her apprentice killers. In fact, it's the latin name for the Peregrine falcon - probably the fastest moving animal to ever grace the Earth with its presence.

This little bird, found pretty much the world over, can hit speeds of up to 202 mph. Admittedly, the Peregrine does cheat a little but instead of using illegal drugs to boost its performance, the full force of gravity is harnessed in order to produce speeds that would put some sports cars to shame. The falcon spends most of its time idling high in the sky. When lunch (normally a pigeon) is spotted, the Peregrine folds its wings away and dives. The resulting collision normally ends with one dead pigeon and one bird with a full belly.

At nearly nine time the speed of Bolt at his best, this is another hands down winner for the world of animals.

We could have carried out a little more analysis. But, to be fair, what we really wanted to show you is that humans aren't really as superior as we like to think. Bolt vs a sloth would come to its natural conclusion but wouldn't be anywhere near as much fun, would it?