Menu
home » units » articles » what is the difference between speed and velocity?

What is the Difference Between Speed and Velocity?

Velocity and speed differ in that velocity is essentially speed with a direction (example: 60kph north). Let's examine this in more detail.

Speed: it has no form. You can't hold it and you most certainly can't own it. Well, not in the conventional sense. So what is it about speed that makes human beings covet it so much? Think about all the things in life that, when mixed in with a little speed, suddenly become far more exciting and worth risking life and limb for. There's many a person who wants to be the fastest runner in the world and they go to huge lengths and sacrifice to train their bodies to peak performance in order to achieve their desires (or resort to less than legitimate means when they fail).

Aircraft designers push their creations to the limits of the laws of physics as they try to shave minutes off travelling time. Car manufacturers have created secret test centers where they graft new technologies onto traditional combustion engines to in order to capture the speed crown with a mechanical version of Frankenstein's monster.

I guess it's all about kudos. It was a rather dramatic entrance to this post but the idea was to get you thinking about the 'why' as well as the 'what'. So, let's get on and learn about what speed really is...

Ok, we already know it's the burning desire of petrol heads and speed junkies the world over but that probably doesn't interest you. 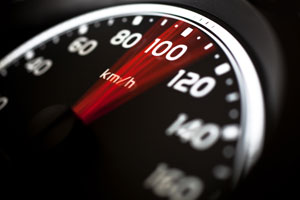 Let's get this down to layman's terms: speed is a unit of measure that allows us to determine how quickly we, or an object, can travel in a set time. Easy, eh?

Now I'm going to break it down a little more with some examples.

Let's assume you don't have an accurate way of measuring your speed. No problem. You can use the following calculation:

So, if you're in a convertible car, enjoying the warm rays of summer sun and wind in your hair, but your speedo is broken, here's how you calculate your speed:

From the road signs, you know that you've covered sixty miles in exactly an hour. Using the equation above we get the following: S=60/1. Voila: You now know that your car has been moving at 60mph. If you want that figure in kilometres per hour, it's 96.5kph (kph and mph converter here).

There are a number of other ways to check your speed based on your requirements. Here's another example: let's say you know how fast you're moving every second; how do you work out the speed over the course of one hour? Easy. You know you're travelling at five meters per second and your speed remains constant. In one minute you'll cover three hundred meters. This translates to eighteen thousand meters per hour or, to put it more simply, eighteen kilometers per hour.

If you're working in miles then use the following conversion to work out your speed:

So, the example above equates to just over eleven miles per hour. Simple.

Ok, here's where the confusion sets in: velocity and speed are similar, in concept. Like speed, velocity is equal to the distance you travel divided by the time it takes to reach a destination. Confused? Don't worry about it and here's why:

velocity differs from speed in that it is a vector whilst speed is a scalar. I.E: speed can be represented on a scale such as your car speedo.

What do we mean by vector? Direction - velocity always has a direction. Speed doesn't have direction (don't get hung up on this - it's all very scientific and probably not what you're interested in learning).

Here's an easier way of looking at it: going back to our rather pleasant example set on a warm, summer's day, you know your car is travelling at sixty miles per hour (the speed). To turn this into a velocity, we add direction. Let's say you travel North for thirty minutes - you now have a velocity of 60mph north.

After a short distance, you decide to hop off the highway and head east. Now you have a velocity of 60mph east.

Assuming your speed remains constant, you will still be moving at 60mph but your velocity changes with every variation in the direction of travel.

Velocity is speed with a direction.

There you have it - a simple way to understand the difference between speed and velocity. You could argue that the two terms are interchangeable and, for most of us, they are. But, if you want to be precise, remember that in order to achieve velocity you have to have direction.