Menu
home » cooking » articles » how many grams are in a cup?

How Many Grams Are In a Cup?

Are you a 'cup half-full' or a 'cup half-empty' kind of person? Hopefully, you're the former, because it's going to take some patience, hope and determination to get to grips with the ludicrous concept that is the concept of cooking with measuring cups. 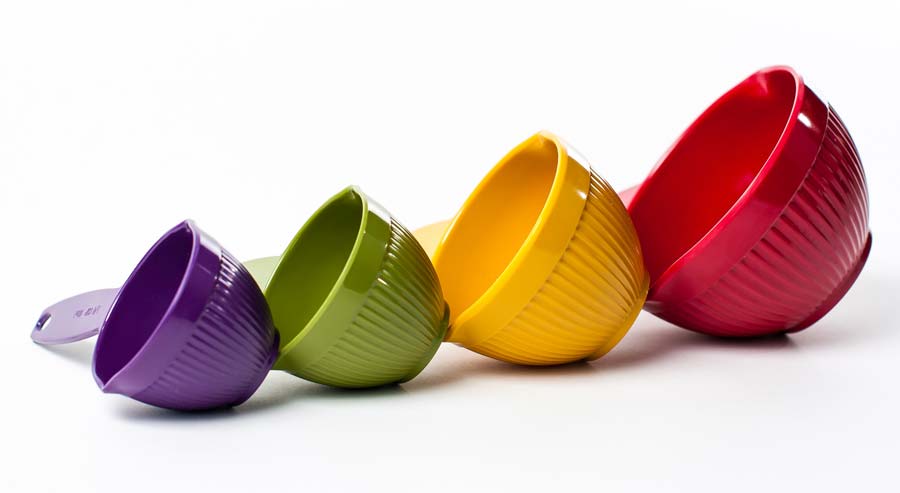 Now, look. If everyone on the planet was born, identity-chipped, sprayed with acid-rain-repellant, and given a government-issue cup in a universal size, then maybe there would be an argument for recipes which state their ingredients as the volume of cups. But until that day comes (and I say "when", not "if" because frankly, anything is possible in this increasingly weird world we live in), then weighing in grams is a much easier and more accurate way to cook. So if you need to know how many grams of sugar are in a teaspoon, just click here, but for anything larger - keep reading.

And to the die-hard kitchen cup cohort, before you start hurling your vessels at me in protest, answer me this: is a cake baked with a wildly erroneous quantity of flour likely to be delicious, or is it going to turn out somewhere between a concrete slab and a chocolate omelette? Because depending what country your cups are from, how tightly you pack the ingredient in, and whether the top is heaped or levelled, baking becomes a bit of a roulette game. And cake is not something to be messed around with. Not on my watch, brother.

In the UK, cups have rarely been used in recipes since the 1960s. If it's an old UK recipe, it'll use the imperial cup (284.131ml), which is significantly more than its more modern 250ml metric cup counterpart, now used (occasionally) in the UK as well as Australia, New Zealand, Canada and the rest of the Commonwealth.

In the US, it's 236.59ml in recipes, but 240ml on nutritional labelling. Still with me? The mess begins before you've even cracked an egg.

Also, to calculate the grams from a recipe given in cups, it's vitally important to consider what the ingredient is. A cup of ball-bearings will weigh much more than a cup of feathers (though both make for delicious pancake toppings, my toothless cousin tells me). Therefore, there's no single gram equivalent for a cup; salt can be as heavy as 300g, while fresh breadcrumbs would only come to 60g. It all comes down to the density of the ingredient.

The handy table below shows a list of gram and ounce conversions for common ingredients in an American cup, as that's the one you're most likely to see in recipes online. If you're looking for pound conversions, see our pounds and cups converter.

Cups of ingredients to grams and ounces

When researching conversions for cups of ingredients, you may notice a variation from source to source. The reason for this is the one we mentioned above: the calculation of cups to grams is dependent on the density of the ingredient and how it is packed into the cup (which can sometimes vary widely). You should always double check these measurements with other sources before using them in important calculations.

The conversion measurements below are general estimates based on the US customary cup (the 236.588mL cup commonly referenced in recipes). A full list of ingredients is available on the baking ingredient conversions page.

And be sure to check your ingredients with our cups to grams converter, where you'll find a long list of foods to help give you a helpful conversion estimate next time you're faced with a recipe that uses cups. There's also a converter and chart for cups to tablespoons, should you need it.

Haven't we made life easy for you?!

While we offer apologies to anyone who was hoping that this illustrated guide to cup sizes might have more of a focus on bras, the good news is that now your ball-bearing and feather cake is going to be beautifully light and fluffy, with just the right amount of flour. Bon appetit!