Whenever working with a recipe, there's always an uneasy tension between precision and usability. The measures that are reasonably accessible (spoons, cups, etc.) are easy to use but give rise to uneasy doubts as to whether one is really using the right amount of the ingredient.

As with other weights and measures covered on thecalculatorsite.com, there's also the ever-present problem of converting from Imperial to metric, or the other way.

In this guide, we'll look at the most commonly used cooking weights and measures, and how to make sense of them. 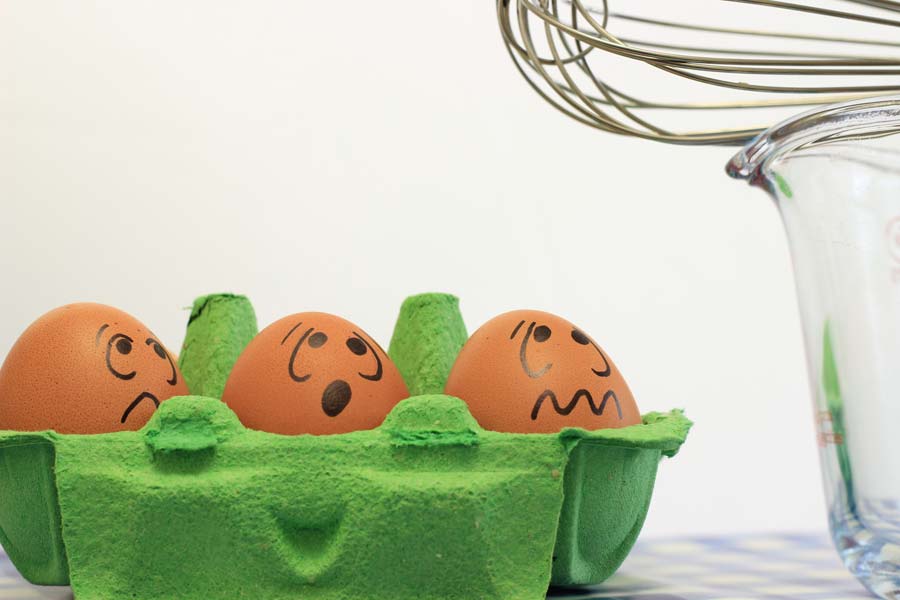 Most ingredients are measured by quantity or volume. Quantity is reasonably self-explanatory: if it says "One onion, finely diced" then that means use one onion.

But... onions, potatoes, carrots, etc., come in all sizes from tiny to humungous. A good rule of thumb is that the default is "medium" sized. So if you only have very small specimens, use two.

Alternatively, measure your bulk ingredients in cups (see below) estimating each vegetable as one cupful.

Also, when working out your quantities, just be sure how much of the core ingredient you're using and scale up on the other ingredients if necessary. So, if your Ragu Bolognese recipe specifies 500 grams of mince beef (not very much for six good sized helpings!) and you want to use a full kilo, then all the other quantities need to be doubled.

Volume: how big is a cup?

In the kitchen, volume can be measured in six different ways: spoons, cups, pints, quarts, liters (or 'litres' with British spelling) and fluid ounces.

We all know what a teaspoon looks like but in fact the actual capacities vary from as little as four milliliters to almost six milliliters. That might not sound significant but represents a 50 per cent difference. Tablespoons (also known as 'serving spoons') are just as variably uncertain. 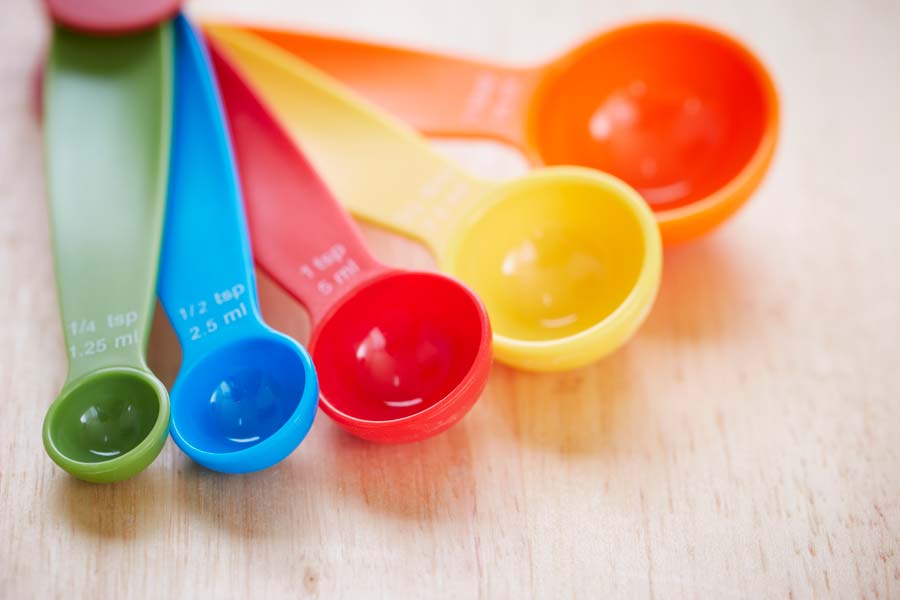 One of the teaspoons in my cutlery drawer struggles to fill a tablespoon three times while another, older and deeper, fills the same tablespoon four times, with some left over. I now discover that there is an Antipodean Aberration in the land of tablespoons, with Australian ones being 25 per cent larger again.

However, 5ml per teaspoon and three teaspoons to one tablespoon are acceptable rules of thumb. You can read more about teaspoons here.

Of course, when dealing with powders or pastes, there is also a question of how much you can load on the spoon. Most recipes are based on level spoonfuls.

Only use heaped spoons if you want to Go Large on that particular ingredient.

Cups are even more problematic, coming in an even wider range of shapes and sizes. For kitchen purposes, 'cup' means a formal teacup, like your Granny saved for occasions when guests came to call.

In absolute terms, a cup is equivalent to half a pint, eight fluid ounces or 236 milliliters (in the U.S.). Thus there are two cups to a pint and just over four cups to a liter. Supposedly, there are 16 tablespoons or 48 teaspoons to a cup, although I can't conceive of any culinary scenario (apart from scooping up spilled milk, maybe) where that would be useful information. You can learn more about converting cups to tablespoons and cups to grams in these two articles.

A measuring jug can do the conversion for you

Fluid ounces really are the most difficult volume measure to work in. We all know roughly what a pint or liter looks like - but a fluid ounce?

A fluid ounce (fl oz) is the amount of water that weighs one ounce. The reason for using this measure is that theoretically it becomes possible to use kitchen scales to measure the amount of liquid (but don't forget to adjust the scales to take account of the container).

Essentially, there are 16 fluid ounces to a pint. How many to a liter? We'll need to come back to that.

A liter, of course, is equivalent to 1.8 pints or almost one quart, which is two pints. Now, as we've seen elsewhere, there's an added complication here in that US pints or quarts are smaller than their Imperial equivalents.

Working in metric is much easier, provides you have a suitably calibrated measuring jug. A liter is 1,000 milliliters or 100 centiliters. A liter of water weighs one kilogram or 1,000 milligrams. In continental Europe, there are measures like the Italian etto, equivalent to 100g or one tenth of a kilo (around 3.5 ounces). 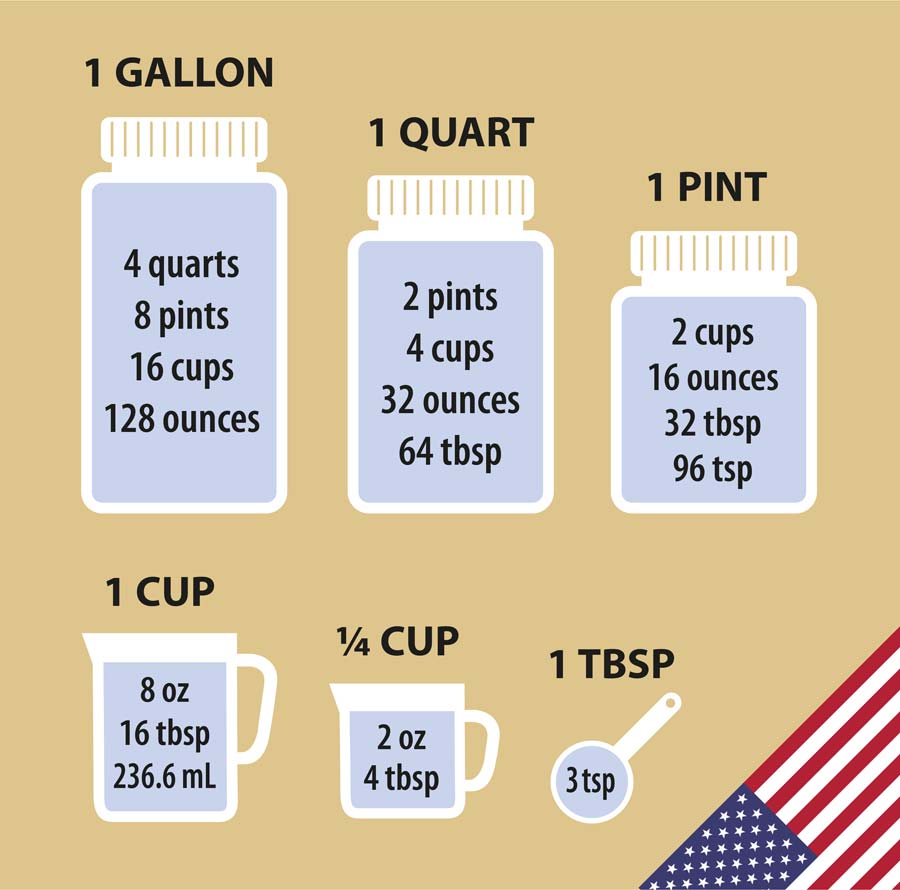 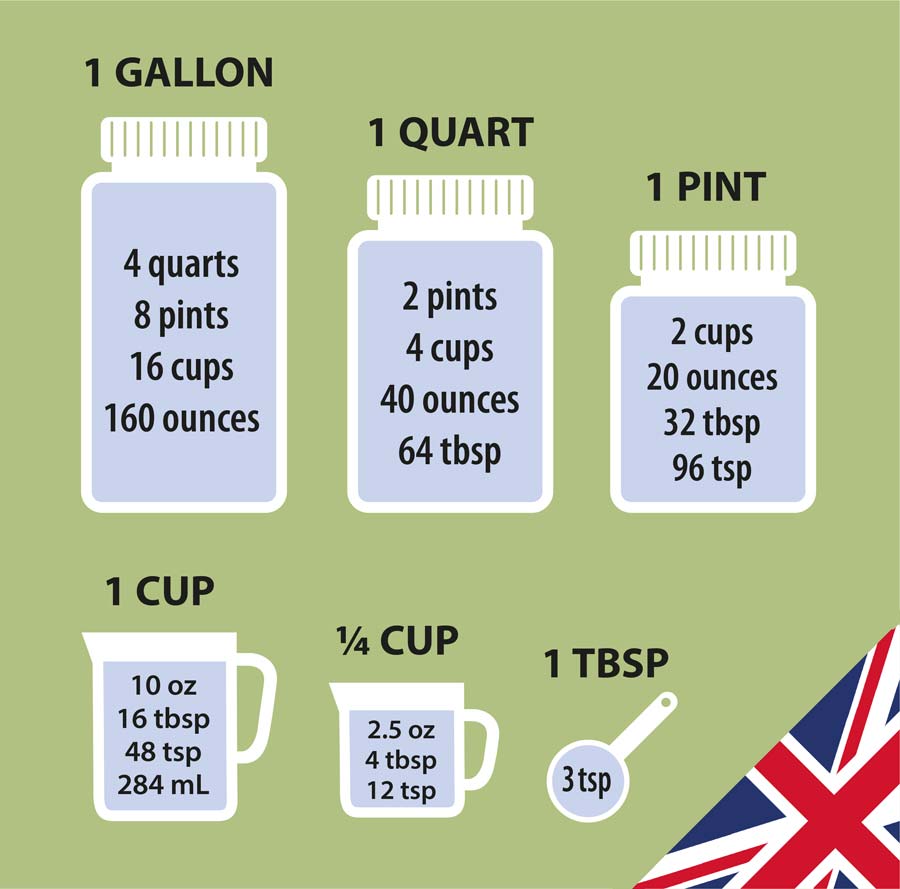 When it comes to weighing out ingredients. You'll be working in US or Imperial pounds and ounces (remembering that 16 ounces make a pound) or metric kilograms and grams. Converting one to the other is relatively easy, especially since the US and Imperial pound weigh the same.

What does this mean for the harassed cook? Well, most of the time, not much. Recipe quantities are usual intended more as a guide than a scientific formula. Usually, what matters is maintaining the relative quantities of ingredients in balance e with each other.

Sometimes, however, the quantities really do matter, particularly when making jelly or jam that needs to set correctly. Provided you're not mixing or translating recipes, then staying in one domain or the other shouldn't be a problem but if working with an American recipe in a British or Australian kitchen, then the safest course is to convert everything to metric liters and milliliters and work in that.

We'll provide a weight conversion table for all the weights and measures mentioned here at the end of this article.

Meanwhile, here is a short list of tips when working with kitchen weights and measures:

Top tips for weight and measures

Should you wish to have some help with converting between different units of weight and volume with your cooking, give our cooking converter a try.